NEW YORK -- Luis Severino tied a career high by pitching eight innings while Didi Gregorius homered and drove in four runs, leading the New York Yankees to an 8-2 victory over the Baltimore Orioles on Friday night.

Severino (13-6) allowed two runs on three hits and little else while improving to 8-2 in 12 starts since the All-Star break. He struck seven and walked one while throwing 95 pitches.

It was the third time Severino completed eight innings. He also did it April 18 vs. the Chicago White Sox and May 24 against the Kansas City Royals.

Gregorius, who is hitting .375 (21-for-56) against Baltimore this season, hit a sacrifice fly in the first inning off Gabriel Ynoa (1-2) and hit a two-run homer in the fifth off Miguel Castro before lifting another sacrifice fly off Richard Bleier.

Aaron Judge, who has 11 homers off Baltimore pitching, didn't add to his totals as he struck out twice and drew a pair of walks He also scored twice, increasing his league-leading total to 114.

Gary Sanchez added a run-scoring bloop single during a three-run seventh, getting his hit after the Yankees loaded the bases on two walks and an error by second baseman Tim Beckham. After Gregorius drove in his fourth run, Chase Headley made it 7-2 with a RBI single to right.

Greg Bird capped the scoring in the eighth by reaching the second deck in right field with his fourth homer of the season.

The Yankees (81-66) tied a season high by reaching 15 games over .500. New York also won for the 11th time in 15 games and beat the Orioles for the seventh time in eight home meetings.

Welington Castillo hit a two-run homer as Baltimore (72-76) lost for the eighth time in nine games since Sept. 5 and fell to 6-11 against the Yankees.

Manny Machado nearly was ejected by plate umpire Paul Emmel in the first inning following a strikeout on a check swing. In the sixth, he slammed the bat on his leg after popping up on the first pitch.

The Yankees took a 1-0 lead in the first on a sacrifice fly to shallow left by Gregorius. The Orioles went up 2-1 when Castillo blasted an 0-2 fastball into the right-field seats with two outs in the second.

NOTES: The Yankees were fined an undisclosed amount by commissioner Rob Manfred for violating a rule governing the use of a dugout phone. Manfred said in a statement that the money is getting donated to hurricane relief efforts in Florida. ... Baltimore CF Adam Jones received the night off. Manager Buck Showalter said Jones seemed tired in his legs after playing a three-game series on Toronto's artificial turf. ... The Yankees honored former executive Gene "Stick" Michael with a moment of silence and a video tribute after being unable to do so Thursday due to technical difficulties with the scoreboard. Michael, who was the GM of the Yankees from 1991 to 1995, died last week. During the ceremony, Showalter, Joe Girardi, Willie Randolph, Paul O'Neill and David Cone placed wreaths at home plate. 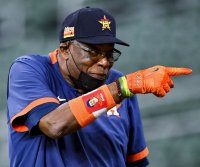