Baseball notebook: Opening day in 2018 will mark a first in MLB history

Major League Baseball released its 2018 regular-season schedule on Tuesday with a wrinkle that hasn't been seen in 50 years.

All 30 teams will begin their respective season on March 29, marking the first time in a half-century that every club opens play on the same day. The 1968 campaign began with all 20 teams in action.

In addition, March 29 represents the earliest start to a major league season, excluding special international events. It also marks only the 12th time in league history -- and first since 2011 -- that the season will begin on a Thursday.

Opening Day features eight divisional matchups among the 15 games, in addition to an interleague contest between the Detroit Tigers and host Pittsburgh Pirates. The New York Yankees open at the American League East-rival Toronto Blue Jays for the first time since 2003 while the San Francisco Giants visit the Los Angeles Dodgers to highlight the divisional contests.

The Oakland Athletics will play a game against the Chicago White Sox on April 17 in which admission will be free. The date is the 50th anniversary of the club's first game in Oakland.

The final day of the 2018 regular season features 12 divisional games on Sept. 30, including the Yankees visiting the rival Boston Red Sox.

Infielder Breyvic Valera was optioned to the Redbirds to make room for Sierra, who has played at the Single-A, Double-A, Triple-A and major league levels this season.

Sierra has batted a combined .270 in 101 games this season with Class A Palm Beach and Double-A Springfield. The 21-year-old will be making his fourth recall this season to St. Louis, with which he is 19-for-52 in 13 games.

Valera went 1-for-5 in three games with the Cardinals since making his major league debut on Sept. 5. He hit a team-best .314 in 117 games with Memphis this season.

--The Texas Rangers will give their fans a look at the biggest piece acquired in the Yu Darvish trade with the promotion of outfielder Willie Calhoun.

The Rangers purchased Calhoun's contract from Triple-A Round Rock and activated 3B Adrian Beltre from the 10-day disabled list. To make room for Calhoun on the 40-man roster, the club also released right-hander Tyson Ross.

Calhoun, 22, is starting on Tuesday when the Rangers host the Seattle Mariners. Calhoun hit .300 and posted a .927 OPS with 31 home runs and 93 RBIs at Triple-A this season while playing for Oklahoma City (Dodgers) and Round Rock. He was part of the trade that sent Darvish to the Los Angeles Dodgers.

Gentry had been out since suffering a fractured finger on Sep. 1 and will join an Orioles team 3 1/2 games out of the second American League wild card spot heading into Tuesday night's games.

Gentry, 33, is batting .257 with 17 runs scored and five stolen bases in 74 games for Baltimore and serves as a solid defensive replacement in the outfield.

--The Cleveland Indians announced Tuesday that rookie center fielder Bradley Zimmer underwent surgery on the fractured fourth metacarpal of his left hand at the New York Hand and Wrist Center of Lenox Hill in New York.

The surgery was performed by Dr. Thomas Graham, who also examined Zimmer on Monday. The procedure required a plate and nine screws to be inserted in order to heal the fracture.

The Indians estimated that Zimmer will be able to resume baseball activities in six to eight weeks.

Zimmer was injured in the seventh inning of Sunday's 3-2 win over the Baltimore Orioles on a head-first slide into first base. He hit a ground ball to Chris Davis and the Baltimore first baseman stepped on Zimmer's hand while applying the tag.

--San Diego Padres reliever Carter Capps will miss the remainder of the season after doctors discovered a blood clot when Capps went to the hospital late Monday night.

Before Tuesday's game against the Minnesota Twins, San Diego manager Andy Green said Capps saw doctors at a Minneapolis hospital after not feeling well Monday. After initially thinking it might be kidney stones, Capps found out it was a blood clot.

"A plan of action has not yet been determined for treatment," Green said.

Green also added that Capps will remain in Minnesota until he is cleared to fly. 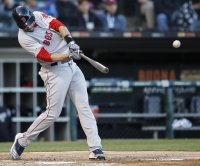