With the victory, Custer became the first Cup Series rookie in almost four years to win a race.

Martin Truex Jr. and Kevin Harvick were dueling for the lead on the lap 266 final restart when Custer -- who restarted fifth with two laps to go -- used a push from Matt DiBenedetto to slide in front of the field. Custer outlasted Truex by a mere .271 seconds to earn the win.

"I knew I just had to get to the top," Custer said. "The top rolled pretty good and once I got past and I was like in third I was like, 'I've just got to take a shot and do whatever I can here.'

"And it ended up the 4 [Harvick] and the 19 [Truex] got together a little bit and I was able to take advantage of it."

One of the wildest late-lap battles for the lead in recent memory!

Brad Keselowski (2009), Trevor Bayne (2011) and Justin Haley (2019) also won while not racing full seasons. All three would have been considered rookies had they been competing a full year.

DiBenedetto came in third, followed by Harvick in fourth and Kurt Busch in fifth. Ryan Blaney (sixth), rookie Christopher Bell (seventh), Aric Almirola (eighth), Keselowski (ninth) and rookie Tyler Reddick (10th) rounded out the top 10. It marked the first time in NASCAR history that three rookies finished in the top 10 in a race.

Sports News // 1 hour ago
No gold for Djokovic at Olympics after he loses in semifinal stunner
July 30 (UPI) -- Novak Djokovic's dream of a "Golden Slam" came to an end in Tokyo on Friday as the world No. 1 was upset in the Olympic semifinals by Germany's Alexander Zverev 1-6, 6-3, 6-1. 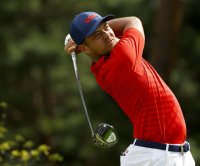