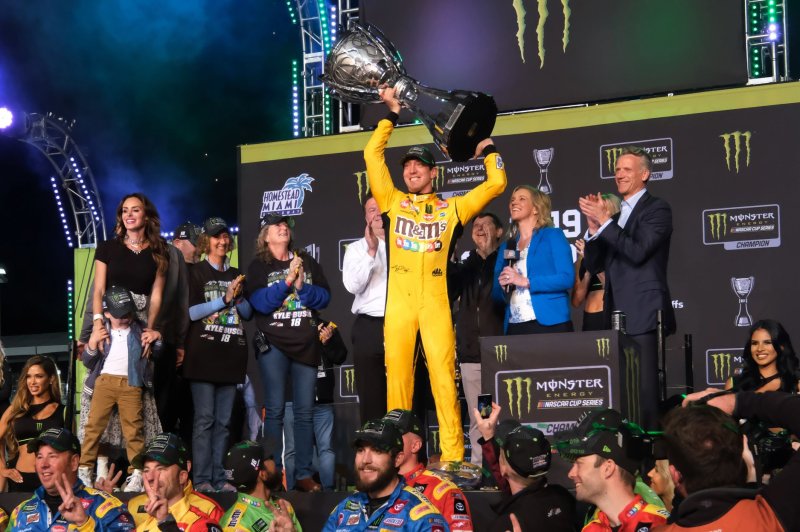 Busch, who led 120 of the 267 laps, won the season finale to snap his 21-race losing streak. He previously won the 2015 title and joins seven-time champion Jimmie Johnson as the only active drivers with multiple championships.

"We have a great race team and a great owner," Busch said after climbing out of his car. "We have the best sponsor in sports. I just can't say enough and thank everyone enough. ... There's always your doubters, always your haters. But you know what? This one's for 'Rowdy Nation.'"

Busch, 34, also became the 16th driver with more than one premier series championship. He is the first repeat champion in the elimination-style postseason.

Busch outran Kevin Harvick, Denny Hamlin, Erik Jones and Martin Truex Jr. in the race. Hamlin was making his first Championship 4 appearance since 2014, while Truex Jr. and Harvick each were making returns to the finale.

The @ToyotaRacing driver WINS at Miami to win the title! pic.twitter.com/LCAnHSBwKs— NASCAR on NBC (@NASCARonNBC) November 17, 2019

Hamlin and Truex Jr. had trouble on pit road that caused them to slip out of contention. Hamlin finished in 10th after a crew member added a large piece of tape across the front grille that caused his engine to overheat.

Truex Jr. fell a lap back after his crew put tires on the wrong side of his car. He recovered to finish second.

MLB // 4 hours ago
Yankees' Aaron Hicks sits out Monday in wake of Minnesota police shooting
April 12 (UPI) -- New York Yankees outfielder Aaron Hicks removed himself from the starting lineup for Monday's series opener against the Toronto Blue Jays in the wake of the police shooting of Daunte Wright in Minnesota.

Sports News // 15 hours ago
Kentucky Derby: Prospective field set for 20 Thoroughbreds
April 12 (UPI) -- With all the preliminaries in the book, here's how the field shapes up for the May 1 Kentucky Derby.

Sports News // 16 hours ago
Kentucky Derby field set in weekend racing
April 12 (UPI) -- Another big weekend of Thorougbred racing at Keeneland and Oaklawn Park set the tentative field field for the May 1 Kentucky Derby amid some fascinating battles among the sprinters and turf specialists.