By
Patti Traina, the Sports Xchange 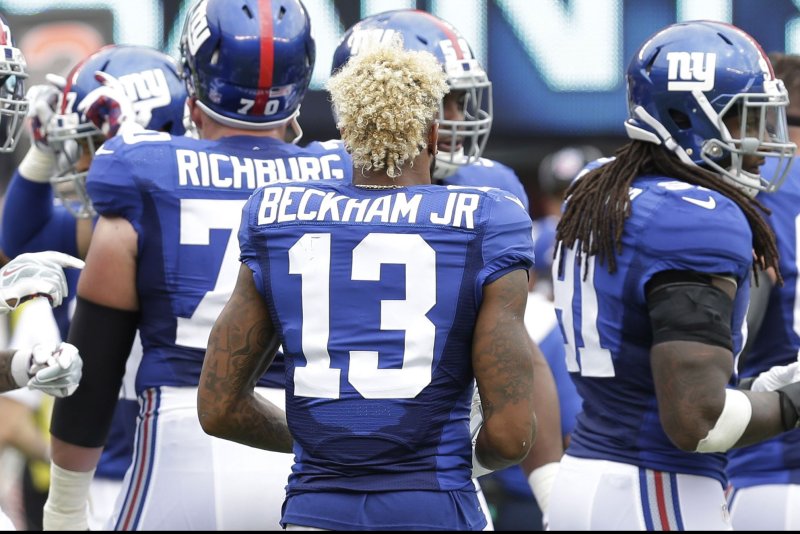 New York Giants' Odell Beckham Jr. stands on the field in the first half against the New Orleans Saints in week 2 of the NFL at MetLife Stadium in East Rutherford, New Jersey on September 18, 2016. The Giants defeated the Saints 16-13. Photo by John Angelillo/UPI | License Photo

New York Giants wide receiver Odell Beckham Jr. is once again in the news for the wrong reasons.

The supercharged Beckham was held to a career-low three receptions (on nine targets) for just 23 yards by the Minnesota Vikings defense in their 24-10 win over the Giants on Monday Night Football.

But a week after head coach Ben McAdoo publicly urged Beckham to get his emotions under control, the advice was ignored.

Beckham, who has yet to score a receiving touchdown, was flagged for taunting after he made a four-yard catch against Vikings cornerback Xavier Rhodes, who appeared to have hit Beckham late out of bounds.

RELATED Minnesota Vikings' Sam Bradford getting comfortable in a hurry

That penalty turned a 2nd-and-6 into a 2nd-and-21, pushing the Giants back to their 20-yard line and, in essence, snuffing out what started out to be a promising looking drive.

As the game wore on, an animated and agitated Beckham could be seen on the Giants' sideline storming his way up and down the Giants' bench with several teammates trying to calm him down.

During one such rant, Beckham was spotted stomping around while the Giants receivers were gathered with position coach Adam Henry on the bench.

After the game, a calmer, but still defiant Beckham was asked what set things off between him and Rhodes.

"I don't know. I'm just out there playing football," he said. "This is a man's sport. You have to protect yourself at all times. Things got that way and I just got to know where I'm at and know that it's all against me. It's going to be that way.

"I have to assume that I am always in the wrong no matter what. That's just a tough pill to swallow but you have to understand it. You have to be able to cope with it and just keep it moving."

When asked if Rhodes hit him out of bounds, Beckham said, "That's not really my call. You'll have to talk to the NFL. Like I said, you have to protect yourself. Going out of bounds, people diving at your legs, like I said this is a man's sport. I'm not going to be out there just taking hits. It just is what it is."

Giants quarterback Eli Manning said after the game that he wasn't sure what set Beckham off, but he did echo McAdoo's sentiments regarding Beckham controlling himself since the receiver is apparently on a short leash with the officials.

"Yeah, he has got to be aware," Manning said. "They're looking for him and he has got to play smart. We can't afford to do anything. They're going to call him and he brought that on himself."

Does that mean that Manning agrees that Beckham needs to do a better job keeping his cool?

"Yep. No doubt," Manning said. "We can't afford penalties that will hurt the team--especially ones that are avoidable."

After the game, Giants general manager Jerry Reese was spotted engaging in a long conversation with Beckham at his locker, the details of which were not disclosed by either man.

But it's almost a given that Reese joined McAdoo and Manning in trying to get Beckham to understand that there is a right way and a wrong way to go about expressing himself during a game.

The bull's eye firmly on his back, a defiant Beckham refused to take any blame for his actions, instead noting that he didn't ask for a camera to be put in his face, blaming social media for blowing things out of proportion.

"When you're at the top of your game they are going to try and knock you off. That's just the case. You keep it moving," he said.

PASSING OFFENSE: C-minus -- There's something about the color purple that brings out the worst in quarterback Eli Manning. Once again, he threw an interception, this one on a deep ball intended for Odell Beckham Jr. who ran his route as though he was on a Sunday stroll rather than with purpose. Beckham and band mates Victor Cruz and Sterling Shepard struggled to get separation, but they weren't exactly helped by the game plan that limited their routes nor by Manning, who seemed to rush through his throws, sometimes unnecessarily.

RUSHING OFFENSE: B -- The trio of Orleans Darkwa, Bobby Rainey and rookie Paul Perkins didn't get many opportunities--18 to be exact. However, they proved that they can make the most of what few chances they do get, rushing for 78 yards, an average of 4.3 yards per carry, and a touchdown. Darkwa, the holder of that one touchdown, in particular was impressive in that he always seemed to find a way to make something out of nothing.

PASS DEFENSE: C -- The injuries in the defensive secondary proved to be disastrous for the Giants in more ways than one. Besides the fact that they struggled with covering the receivers--cornerback Trevin Wade in particular had a rough night when isolated on a receiver or tight end--the pass rush seemed stagnant, perhaps a direct result of Vikings quarterback Sam Bradford having all day to scan the field for an open receiver.

RUSH DEFENSE: C -- Eventually, the Giants clamped down on the Vikings' running game, but not before giving up two rushing touchdowns and allowing Jerick McKinnon to rush for 85 yards on 18 carries with a long of 25. That was the longest rush against the Giants run defense this year. Further, the 104 rushing yards racked up by the Vikings was the most given up since Week 1 when the Cowboys rushed for 101 yards.

SPECIAL TEAMS: C -- The biggest blemish on this group's resume this week was the miffed punt and fumble by Dwayne Harris that the Vikings turned into a touchdown. That screw-up, in essence, set the tenor of what was to come for the Giants, who punted on six of their first eight possessions. Thankfully the pristine indoor conditions helped both the punting and the kicking game as Brad Wing finally put some balls inside of the 20 (three of them to be precise) while Josh Brown was money on all his kicks.

COACHING: C -- Ben McAdoo keeps aiming for smart, fundamentally sound football with a commitment to poise and discipline, yet every week it seems like someone else is sabotaging the team's efforts to fulfill that identity. After the game, Manning admitted that they were caught off guard a bit by what the Vikings did to them; meanwhile the defense seemed to have no answers (again) for covering the opposing tight end. It's too early to panic after two straight losses, but if this keeps up, McAdoo is going to need to make a statement that gets his team's attention.

Sports News // 16 hours ago
Scabbard favored in Kentucky Derby prep in weekend horse racing
Jan. 17 (UPI) -- Scabbard is the favorite in the weekend's Kentucky Derby prep,; Dubai continues to produce thrilling finishes and Hong Kong's Horse of the Year needs a good run to get to Dubai.