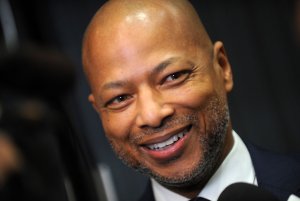 NFL // 2 years ago
Ben McAdoo 'at peace' with how he handled Eli Manning benching
Former New York Giants coach Ben McAdoo claimed he's "at peace" with the decision that led to the unceremonious end of Eli Manning's consecutive games streak. 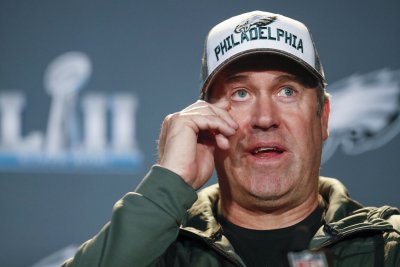 NFL // 2 years ago
Ex-Giants coach McAdoo on Solder: 'I don't think he's a very good player'
Nate Solder became the highest-paid offensive lineman in football when he signed with the New York Giants in March.

NFL // 2 years ago
Giants' Barkley on Gettleman: 'We're there for him'
Rookie running back Saquon Barkley and the rest of the New York Giants players learned that general manager Dave Gettleman had been diagnosed with lymphoma at an unscheduled team meeting. 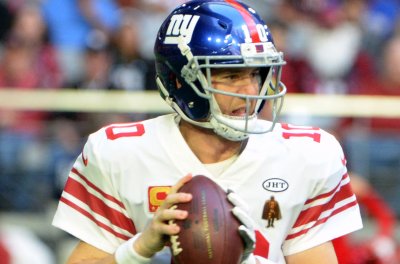 NFL // 2 years ago
New York Giants: What went right, what went wrong
The New York Giants were supposed to follow up their 11-5 record from 2016 with a deeper playoff run. Instead, they proved to be a dysfunctional group of pretenders in what was one of the wildest and disappointing seasons in the franchise's history.

NFL // 2 years ago
Manning OK with Giants drafting QB
Eli Manning expects to be the starter for the New York Giants next season, but he will have no problems if the team uses its top pick to select a quarterback in this year's NFL Draft.

NFL // 2 years ago
New York Giants brass convinced Pat Shurmur right man for job
After a 3-13 season that saw the New York Giants' locker room erode into a cesspool of infighting, dejected attitudes and uncertainties, the team is turning to Pat Shurmur.

I am an optimist, and I believe most situations can be worked out

I thought it was a little bit of late notice, but that's the way the NFL works sometimes

Jerry Reese (born July 22, 1963) is the current General Manager of the New York Giants. He succeeded Ernie Accorsi as general manager on January 16, 2007, having been with the Giants since 1994. He resides in Jefferson Township, New Jersey.

Reese is a native of Tiptonville, Tennessee, where he played for the Lake County Falcons' 1980 state champion 1-A high school football team. He then played for the University of Tennessee at Martin where he was later an assistant coach before taking a job as a scout for the New York Giants. From 2002 until becoming General Manager, he was the Director of Pro Personnel for the Giants.

Reese is considered a tactical genius after the success of almost all of the draft picks from the 2007 NFL Draft, which included Aaron Ross, Steve Smith, Jay Alford, Kevin Boss, Michael Johnson, Ahmad Bradshaw, and Zak DeOssie. Some of them played important roles in the Giants' Super Bowl XLII victory.

FULL ARTICLE AT WIKIPEDIA.ORG
This article is licensed under the GNU Free Documentation License.
It uses material from the Wikipedia article "Jerry Reese."
Back to Article
/