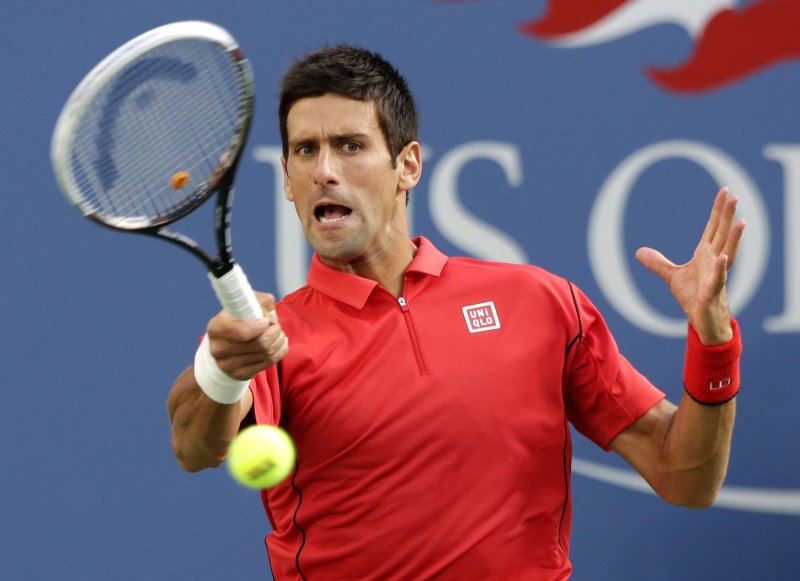 Novak Djokovic, shown during last year's U.S. Open, won in straight sets Monday as he opened his Australian Open play. It was the 22nd consecutive match win for Djokovic at the Australian Open as he seeks a fourth-consecutive title at the year's first tennis major. UPI/John Angelillo | License Photo

The Serbian star, seeded second behind Rafael Nadal in 2014, suffered a first-set break but had two breaks of his own in taking the early lead. He dropped only five points on serve in the second set but Lacko was able to force a tiebreak.

Djokovic then advanced by taking more than two-thirds of the points in the final set. He won 78 percent of the points on serve in the match.

Third-seeded David Ferrer survived dropping his serve five times in a 6-3, 6-4, 6-4 decision over Alejandro Gonzalez. Ferrer did pile up eight breaks and won 53 percent of the points when Gonzalez served to make up for lost service games.

No. 7-seeded Tomas Berdych defeated Aleksandr Nedovyesov 6-3, 6-4, 6-3 by taking 82 percent of the points when serving and saving both break points he faced. Eighth-seeded Stanislas Wawrinka advanced when, after Wawrinka was up 6-4, 6-1, Andrey Golubev retired with a left leg injury, and No. 9-seeded Richard Gasquet was a 7-5, 6-4, 6-1 winner over David Guez.

Mikhail Youzhny, seeded 14th, was a 6-1, 6-4, 6-2 victor over Jan-Lennard Struff with seven breaks. Struff helped Youzhny's cause with 61 unforced errors.

The only seeded man to exit the draw Monday was No. 12 Tommy Haas, who was down 7-5, 5-2, to Guillermo Garcia-Lopez when he was unable to continued due to a shoulder injury. No. 15-seeded Fabio Fognini also advanced on a retirement when Alex Bogomolov Jr. was unable to come out for the third set because of an unspecified injury. Fognini was up 6-3, 6-2 at the time.