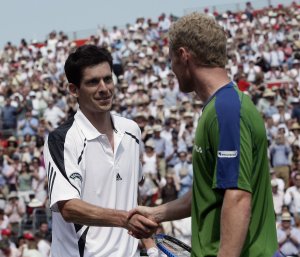 If I knew exactly where I was hitting the ball I would've hit him, not the bottom of the chair

I was in control from the beginning, but suddenly lost my nerve

Dmitry Igorevich Tursunov (Russian: Дми́трий И́горевич Турсу́нов​ (help·info); born December 12, 1982, in Moscow, Russia) is a Russian professional male tennis player. He was 12 years old when he moved to live in the United States, where he has lived ever since, to further his prospects of becoming a professional player.

Tursunov is an offensive baseliner with excellent groundstrokes from both sides, and prefers to play on faster surfaces; he jokes about his lack of ability and success on clay courts. He is sponsored by Fila and Wilson.

Tursunov helped the Russian Davis Cup team win the 2006 Davis Cup, and reach the finals of the 2007 Davis Cup.

FULL ARTICLE AT WIKIPEDIA.ORG
This article is licensed under the GNU Free Documentation License.
It uses material from the Wikipedia article "Dmitry Tursunov."
Back to Article
/