The Year in Review 2012: London, Phelps, Bolt star at Olympics 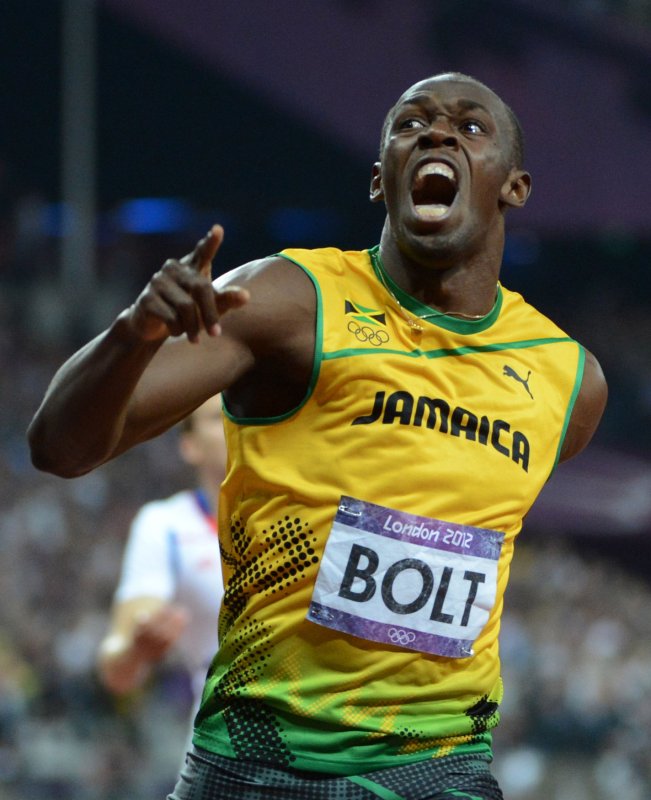 Jamaica's Usain Bolt screams in jubilation after crossing the finish line to win the gold medal in the Men's 200M Final at Olympic Stadium during the London 2012 Summer Olympics in Olympic Park in Stratford, London on August 9, 2012. Bolt became the first Olympican to win the 100M and 200M race in consecutive Olympics. His time was 19.32. Jamaica swept the race with teammates Yohan Blake getting the silver and Warren Weir the bronze medal. UPI/Pat Benic | License Photo

Jamaica's Usain Bolt gestures as he crosses the finish line to win the gold medal in the Men's 200M Final at Olympic Stadium during the London 2012 Summer Olympics in Olympic Park in Stratford, London on August 9, 2012. Bolt became the first Olympian to win the 100M and 200M race in consecutive Olympics. His time was 19.32. Jamaica swept the race with teammates Yohan Blake getting the silver and Warren Weir the bronze medal. UPI/Pat Benic | License Photo

London and the home-standing British athletes stood out at the 2012 Olympics but the spotlight was grabbed by Michael Phelps and Usain Bolt.

The Games returned to London for the first time since 1948 (the third time overall) and opened with a stunning "Isles of Wonder" ceremony that celebrated the Industrial Revolution, literature, popular music and even the British healthcare system.

It also featured a film in which actor Daniel Craig, reprising his James Bond persona, escorted Queen Elizabeth II to the Olympic Stadium via helicopter with the queen appearing to parachute to the venue before formally opening the Games.

Nearly as stunning -- and certainly more important -- the parade of athletes at the Opening Ceremonies included for the first time female competitors from Brunei, Qatar and Saudi Arabia.

The British athletes ended up fourth in the medal standings with 65 total. Their 29 gold medals were third most.

The Games were in their fifth day before Britain broke through with its first gold when Helen Glover and Heather Stanning won the women's coxless pair in rowing and Bradley Wiggins took the men's cycling time trial. There were three more gold medals the next day and three more after that. Aug. 4 saw Britons win six gold medals.

Andy Murray of Great Britain is overcome with emotion after winning the Gold Medal at the London 2012 Summer Olympics on August 5, 2012 in Wimbledon, London. Murray defeated Roger Federer of Switzerland 6-2, 6-1, 6-4, to win the final. UPI/Brian Kersey
License photo | Permalink

On Aug. 5, Andy Murray defeated Roger Federer at Wimbledon -- the two had met a few weeks earlier for the Wimbledon Championships title -- and won the men's singles tennis gold.

Murray teamed with Laura Robson and ended up with silver in mixed doubles.

Alistair Brownlee and his brother Jonathan placed first and third, respectively, in the triathlon.

In the shorter races, Bolt was the dominant force. The Jamaican runner repeated, matching his medal count in 2008 Beijing, as champion in the 100-meter and 200-meter dashes along with the 400-meter relay.

His time of 9.63 seconds in the 100 at London set an Olympic record (but slower than his world record of 9.572). It was the first time since 1988 a sprinter repeated as Olympic champion.

He capped his Games in the 400-meter relay, teaming with Nesta Carter, Michael Frater and Yohan Blake for a world-record time of 36.84 seconds.

Bolt was one of four athletes to win three gold medals in London. The others were swimmers Allison Schmitt and Dana Vollmer and runner Allyson Felix -- all Americans. Missy Franklin, another U.S. swimmer, won four golds and a bronze. Schmitt added a silver and a bronze to her achievements, giving her five medals overall. U.S. male swimmer Ryan Lochte had two golds, two silver and a bronze and Australian female swimmer Alicia Coutts (one gold, three silver and one bronze), also won five medals.

Then there is Phelps. He matched Franklin's four golds for most the most of the 2012 Games and had a pair of silver medals for six medals overall.

Michael Phelps of the United States holds a trophy for the most decorated olympian presented to him after he won his 18th Gold Medal in the Men's 4 X 100M Medley Relay Final at the London 2012 Summer Olympics on August 4, 2012 in Stratford, London. Phelps has won 22 total Olympic Medals. UPI/Brian Kersey
License photo | Permalink

Phelps was presented with a special silver trophy by Julio Maglione, the president of FINA, the international swimming federation, in recognition of his Olympic accomplishments.

The most dominating showing in the Games was by U.S. basketball teams. The men, whose lineup included Kobe Bryant, Kevin Durant and LeBron James, won their five qualifying games by a combined 191 points. Only the 107-100 gold medal game with Spain could be considered close.

Anthony Davis played in seven games but every other player for Coach Mike Krzyzewski appeared in all eight games. Durant's 19.5 point average topped the Americans but four others averaged double figures.

It was their fifth gold in six Games and 14th in the 18 Olympics that have featured basketball.

The American women, with Candace Parker, Diana Taurasi and Tina Charles, were a plus-183 in their five qualifying games and defeated France by 43 points in the gold medal game. It was their fifth consecutive gold medal. Coach Geno Auriemma had 12 women on the team and all but two averaged at least six points a game. Taurasi led the team with a 12.4 scoring average.

Serena Williams was a double gold medalist, sweeping through the singles field for that title and teaming with sister Venus for a third women's doubles gold. (Venus Williams won the singles gold in 2000).

The Chinese men took the team gold medal in gymnastics with Japan second and Great Britain taking the bronze. Japan's Kohei Uchimura, the silver medalist in 2008, won the all-around gold.

USA's Gabrielle Douglas performs on the Balance Beam on her way to winning the gold medal in the Women's Gymnastics Individual All-Around event at the North Greenwich Arena during the London 2012 Summer Olympics in Greenwich, London on August 2, 2012. Russians Victoria Komova won the silver and Aliya Mustafina won the bronze. UPI/Pat Benic
License photo | Permalink

American Gabby Douglas won the women's individual all-around and was on a strong U.S. group that took the team gold. Russia was second and Romania third in the team standings.

One of the oddest controversies of the Games was the disqualification of four teams, including world champions Wang Xiaoli and Yu Yang of China, in women's badminton doubles for not delivering best efforts. Those teams determined they would have better knockout-round draws if they lost certain round-robin matches. Fans booed when two teams squared off and each was obviously trying to lose.

Medals were won by athletes from 85 of the 204 competing countries. That includes Bahrain, Botswana, Cyprus, Gabon, Grenada, Guatemala and Montenegro, which each picked up their first Olympic medals.

At the closing ceremony the Olympic flag was symbolically passed to Rio de Janeiro Mayor Eduardo Paes. Brazil is the host country for the Games of the XXXI Olympiad, Aug 5-21, 2016. Before that, the Winter Olympics will be contested February 2014 in Sochi, Russia.

The Rio 2016 segment is performed during the Closing ceremony of the London 2012 Summer Olympics on August 12, 2012 in London. UPI/Ron Sachs
License photo | Permalink