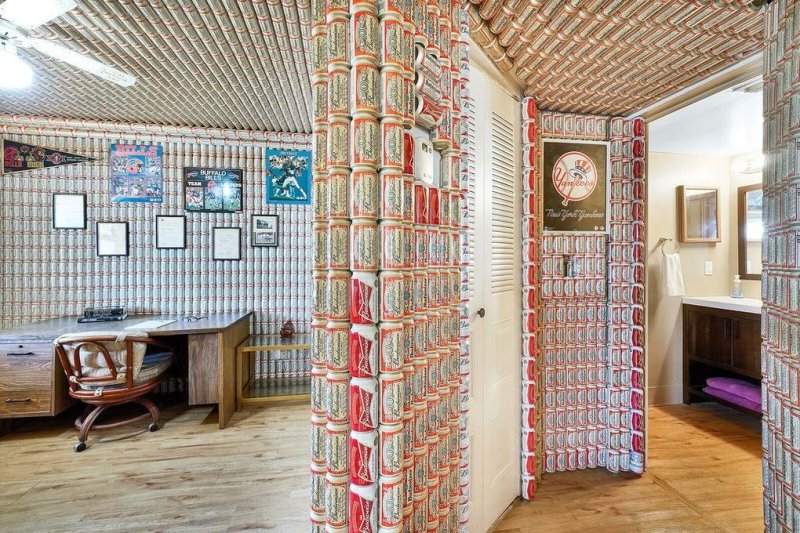 A condo listed for sale in Lake Worth, Fla., is going viral due to the walls and ceilings of the home being covered in Budweiser beer cans. Photo courtesy of Kearney & Associates Realty

Sept. 15 (UPI) -- A listing for a condo in Florida is going viral after pictures were posted online showing off an unusual aspect of the decor -- the walls and ceilings of the home are covered in Budweiser beer cans.

Realtor Kristen Kearney said she initially didn't know what to expect when she received a call about listing the Lake Worth condo.

"They warned me that the home was wallpapered in beer cans," Kearney told Realtor.com. "And I thought to myself, 'Well, I wonder where in the world they found beer-can wallpaper.'"

The reality of the home turned out to be far stranger -- the "wallpaper" was actual beer cans.

Kearney said the cans cover every wall and ceiling of the home, except for the bathroom.

"If you look closely at the photos, you can really see the lengths the owner went to," Kearney said. "He even created a crown molding look with the cans."

Kearney said the condo's former owner, who is now deceased, was a lifelong fan of the Anheuser-Busch beer.

"It was his life's mission to wallpaper his home in beer cans," Kearney said, "and he did it."

Kearney said the condo was originally listed for $110,000 in August, but the price was reduced to $100,000 in September. She said the price reduction, as well as the viral photos, resulted in a flood of interest in the property.

"We actually received multiple offers. It is currently under contract, and I have a backup offer as well," she said.

Odd News // 3 hours ago
Workers dig through trash to recover lost wedding rings
Nov. 29 (UPI) -- A New Hampshire man who accidentally threw his wife's wedding rings in the trash was able to find them again with some help from sanitation workers.

Odd News // 7 hours ago
Angler finds message in a bottle in Maryland
Nov. 29 (UPI) -- A Virginia angler casting his line in the Chesapeake Bay said his most exciting catch of the day wasn't a fish -- it was a message in a bottle.