In 1901, Pablo Picasso's artwork was given its first exhibition, in Paris.

In 1986, actress Raquel Welch won a $10.8 million verdict against MGM, which she claimed ruined her career by firing her from the 1980 movie "Cannery Row."

In 1991, on the eve of the 41st anniversary of the start of the Korean War, the U.S. and North Korea agreed on returning the remains of missing soldiers; 11 sets of remains were shipped.

In 1992, the U.S. Supreme Court ruled that health warnings on cigarette packs don't necessarily exempt tobacco companies from false advertising lawsuits if they continue to tell consumers that smoking is safe.

In 1993, the FBI arrested eight men in an alleged plot to bomb several sites in New York City. A ninth was arrested six days later.

Also in 1993, Kurdish militants, seeking to call attention to their nine-year struggle to form an independent Kurdish state, attacked Turkish diplomatic missions and businesses in more than two-dozen European cities.

In 2002, U.S. President George W. Bush said publicly for the first time that the United States would not support a Palestinian state so long as Yasser Arafat was in command.

In 2003, author Leon Uris, who wrote "Exodus," the story of the struggle to establish and defend the state of Israel, and other famous novels, died at age 78.

In 2004, more than 100 people died in a series of apparently well-coordinated insurgency attacks on five cities in Iraq.

In 2005, the U.S. Department of Agriculture reported the nation's second confirmed case of mad cow disease.

In 2006, Newsweek magazine said a reconciliation plan drafted by the Iraqi government included a timetable for U.S. troop withdrawal and amnesty for some insurgents. U.S. President George Bush and the U.S. Congress steadily have rejected a timetable approach.

Also in 2006, California Gov. Arnold Schwarzenegger rejected a White House request to send another 1,500 National Guard troops to the U.S.-Mexico border to protect against illegal immigration. The state earlier had agreed to send 1,000 troops to the border. 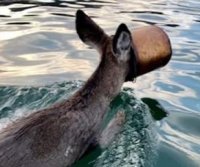 Odd News // 2 hours ago
Deer rescued while swimming with bucket over head
Nov. 23 (UPI) -- An animal rescuer in New York state came to the assistance of a deer spotted swimming in the Long Island Sound with a paint bucket stuck over its head.