The moon is waxing. The morning stars are Venus, Saturn and Mars. The evening stars are Mercury, Pluto, Jupiter, Uranus and Neptune.

In 1825, the Erie Canal, America's first man-made waterway, was opened, linking the Great Lakes and the Atlantic Ocean via the Hudson River.

In 1854, known to history as the Charge of the Light Brigade, 670 British cavalrymen fighting in the Crimean War attacked a heavily fortified Russian position and were wiped out.

In 1881, Pablo Picasso, one of the greatest and most influential artists of the 20th century, was born in Malaga, Spain.

In 1929, during the Teapot Dome scandal, Albert B. Fall, who served as Interior secretary in President Warren G. Harding's Cabinet, was found guilty of accepting a bribe while in office, first individual convicted of a crime committed while a presidential Cabinet member.

In 1986, the International Red Cross ousted South African delegates from a Geneva meeting because of Pretoria's policy of apartheid. It was the first such ejection in the organization's 123 years.

In 1993, Canadian voters rejected the Progressive Conservative party of Prime Minister Kim Campbell and gave the Liberal Party, led by Jean Chretien of Quebec, a firm majority in Parliament.

In 1994, Susan Smith reported to police in Union, S.C., that her two young boys had been taken in a carjacking. Nine days later, she confessed she had rolled her car into a lake, drowning the children.

In 2000, AT&T announced it would break itself into four separate businesses in a bid to renew investor support.

In 2001, the U.S. Senate, by a 90-1 vote, approved a final package of anti-terror reforms designed to help law enforcement monitor, observe and detain suspected terrorists.

In 2002, Democratic U.S. Sen. Paul Wellstone of Minnesota and seven others were killed in the crash of a small plane near the Eveleth-Virginia Municipal Airport, about 180 miles northeast of Minneapolis.

In 2004, at least 78 Muslim detainees suffocated or were crushed to death in southern Thailand after the police rounded up 1,300 people and packed them into trucks following a riot.

Also in 2004, a top civilian at the U.S. Department of Defense Pentagon called for a federal investigation into how contracts in Iraq and the Balkans were awarded to the Halliburton company, formerly run by U.S. Vice President Dick Cheney.

In 2005, Iraq's draft constitution was reported approved by more than three-quarters of the voters in the Oct. 15 referendum.

Also in 2005, civil rights icon Rosa Parks died in Detroit at age 92. Parks, an African-American woman, gave new impetus to the rights movement when in 1955 she refused to give up her seat to a white man on a Montgomery, Ala., bus.

A thought for the day: Pablo Picasso said, "I am only an entertainer who has understood his time."

Odd News // 21 hours ago
Goodwill worker finds $5,000 left in donated jacket pocket
March 3 (UPI) -- Employees at a Goodwill store in Texas said it took weeks of searching to find $5,000 cash that was mistakenly left in the pocket of a jacket that was donated to the store. 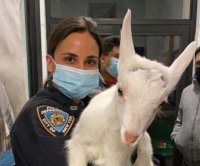