"i decided i don't want to go through with it," the television personality tweeted.

Kailyn Lowry decided not to go through with a scheduled breast augmentation and liposuction. File Photo by Jim Ruymen/UPI | License Photo

The 25-year-old television personality said in a series of tweets Tuesday that she decided to not go through with a scheduled breast augmentation and liposuction in Miami, Fla.

"I won't lie to y'all, i came to Miami for lipo & a boob job. But hours before my surgery i decided i don't want to go through with it," Lowry wrote to her 1.3 million followers.

"When i get home I'll use the money i was gona spend on surgery for a nutritionist & get back into working out," she added. "Damned if i do and damned if i don't."

I won’t lie to y’all, i came to Miami for lipo & a boob job. But hours before my surgery i decided i don’t want to go through with it

Lowry's decision drew praise from co-star Chelsea Houska and ex-husband Javi Marroquin, from whom she split in 2016 after nearly three years of marriage.

"I'm super proud of her for making that decision!" Marroqin said in an interview with E! News. "I used to tell her all the time to do it naturally. Good for her. The reward will be greater in the end."

Lowry and Marroquin share 4-year-old Lincoln, and have appeared on friendly terms as of late. Lowry wished Marroquin well in a statement to Us Weekly this month following his split from her co-star Briana DeJesus.

"It's none of my business, so my mouth is closed. I wish Javi the best, as always," she said.

TV // 13 hours ago
Terry Crews on new marriage audiobook: 'You are stronger together'
April 15 (UPI) -- Terry Crews discussed his new audiobook on marriage titled "Stronger Together" that he created with his wife Rebecca King Crews while appearing on "Jimmy Kimmel Live." 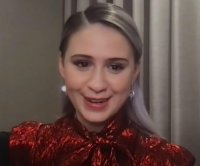