Adam Driver arrives at a photocall for the film "Paterson" during the 69th annual Cannes International Film Festival on May 16, 2016. File Photo by David Silpa/UPI | License Photo

The 2 1/2-minute clip has gotten nearly 500,000 views since it was posted on YouTube on Sunday. It shows brothers, played by Channing Tatum and Adam Driver, enlisting the help of a jailed criminal, played by Daniel Craig, to steal money during a NASCAR race.

Co-starring Dwight Yoakam, Seth MacFarlane and Riley Keough, the movie is expected to open in theaters Aug. 18 and will begin streaming exclusively on Amazon in early 2018.

"Trying to reverse the infamous Logan Family Curse, brothers Jimmy Logan and Clyde Logan, along with sister Mellie Logan, hook up with accomplice Joe Bang to execute an impossibly elaborate robbery during the Coca-Cola 600, the biggest NASCAR race of the year," a synopsis said.

Movies // 19 hours ago
Blake Lively to star in 'Lady Killer' adaptation
May 6 (UPI) -- "Gossip Girl" alum Blake Lively will produce and star in "Lady Killer," a new film written by Diablo Cody and based on the Dark Horse Comics series. 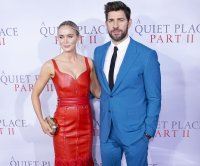