The television personality and the Oklahoma City Thunder player separated in April. 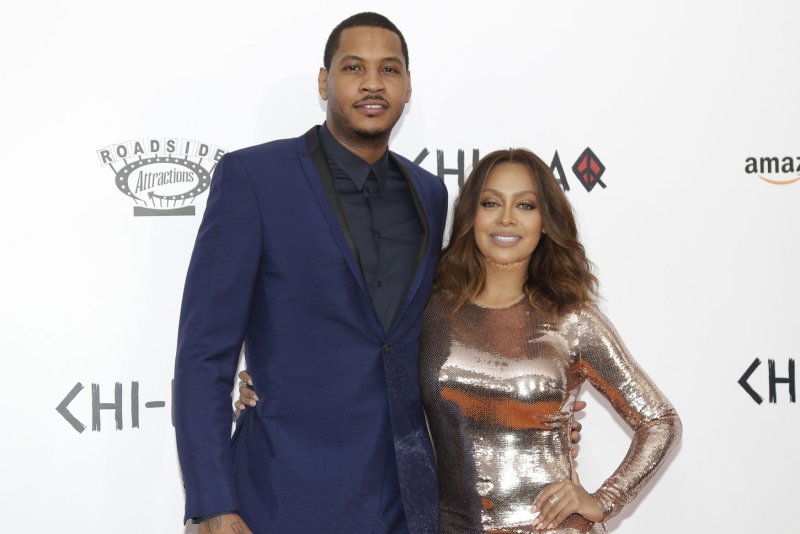 La La Anthony (R), pictured with Carmelo Anthony, said she will spend the holidays with the Oklahoma City Thunder player and their son. File Photo by John Angelillo/UPI | License Photo

The 38-year-old television personality said in an interview with E! News that she will spend the holidays with the 33-year-old NBA star and their 10-year-old son, Kiyan.

"Well, Carmelo and I have a son together, so our holidays will be with our son, which is the most important part of both of our lives," La La shared Tuesday. "We wanna keep it normal and regular for him and my son should have both of his parents on the holidays. So yes, we'll be together."

"We get along great," the star added. "We're gonna have a great Christmas and I'm actually looking forward to it."

La La had shared a video of herself and Kiyan in front of their Christmas tree while promoting her partnership with Axe on Monday.

"My baby boy Kiyan is all grown-up now and these holiday gift packs are the perfect way to make sure he smells and looks fresh all day," she wrote.

La La and Carmelo separated in April after nearly seven years of marriage. The television personality told Page Six this month that she's focused on Kiyan and not her rumored reconciliation with Carmelo.

"I'm trying to be a great parent to my son and that's where I'm putting our focus on right now," she said before responding "no comment" when asked if she is being pursued by other men.

Catherine Zeta-Jones, Michael Douglas visit India with their kids Lady Gaga confirms Las Vegas residency: 'I was made for this town' Chloe Kohanski wins 'The Voice' Season 13: 'At a loss for words' Catt Sadler leaves E! News due to 'massive disparity in pay'