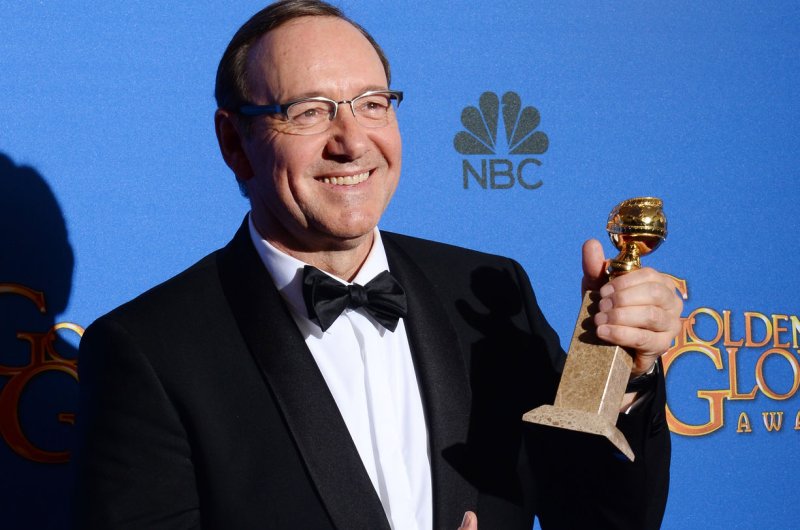 Johnny Carson smiles during his monologue at the 56th annual Academy Awards in Hollywood on April 9, 1984. File Photo by Mike Hill/UPI | License Photo

NEW YORK, April 19 (UPI) -- Elvis & Nixon star Kevin Spacey says he pretended to be Johnny Carson's brother to get free theater tickets when he was just starting his career and had no money.

The story came up Monday at a Tribeca Film Festival press conference where a journalist asked Spacey if he ever used his famous name to get something he wanted.

"I used to walk up to Broadway theaters when I was starting out and broke and wanted to go see a play and because I had been doing standup comedy and I did a Johnny Carson impression, I would pretend at the box office to be Kevin Carson," Spacey recalled.

"The most surprising thing is I usually got in," the double Oscar-winner said, adding he would use a Johnny Carson-like voice and tell the ticket clerks someone from The Tonight Show had secured entrance for him.

"It was always early previews and they wanted the house to be filled, so they'd give me tickets... So, in a sense, I used Johnny Carson's celebrity to get into theaters."

The question then went to Spacey's co-star Michael Shannon, who was sitting beside him on the panel.

"Speaking of late-night, talk-show hosts, I'm just glad that I got on Letterman before he retired. That's about it," said Shannon, whose other film credits include 99 Homes, The Iceman, Take Shelter, Man of Steel and Midnight Special.

TV // 38 minutes ago
Sharon Osbourne on 'Talk' exit: 'It changes from day to day what is correct'
April 17 (UPI) -- Sharon Osbourne broke her silence about her departure from "The Talk" last month on Friday's edition of "Real Time with Bill Maher."

Music // 21 hours ago
ACM Awards: How to watch, what to expect
April 16 (UPI) -- The 56th annual Academy of Country Music Awards is taking place Sunday on CBS.

Entertainment News // 21 hours ago
TXT performs 'We Lost the Summer' on 'Ellen'
April 16 (UPI) -- K-pop group TXT performed on "The Ellen DeGeneres Show" and also appeared in a behind-the-scenes video about the performance.