UPI Spotlight: J.J. Abrams: Not everyone was convinced Jennifer Garner was 'hot enough' for 'Alias'

"She had actually been on Felicity and I knew her and my wife had said: 'You've got to write something for her. She has got such a spark.' And I wrote Alias thinking about her, but I didn't quite know. Then I finished it and she came in and was amazing. I remember someone at the network was like, 'You know, I don't know, is she hot enough?' So, anyway..." Abrams said during a recent panel discussion with Chris Rock at the Tribeca Film Festival.

"All I will say is the executive is no longer there and now she is Jen Garner [the movie star,] so it worked out. ... It was incredible doing the pilot, which I directed. I remember watching her kind of find this strength in herself. It was just so cool to see and she just did a spectacular job and she's one of our dearest friends. She's the greatest."

Abrams also revealed during the chat that Keri Russell was not at all who he had in mind to play the title character in the college drama Felicity, but he hired the actress because she was so good in her audition.

"The part of Felicity was this sort of wallflower. She never had a boyfriend, she didn't have any friends and then Keri Russell walks in, who is phenomenally beautiful and just incredibly vibrant and sweet and, of course, at first, I thought, 'This is ridiculous, but she's here, go ahead.' And she was so funny and so vulnerable and, also, it's TV, so the TV version of the wallflower is Keri Russell," Abrams noted. "Anyway, she was amazing and that was an example of someone who came in, despite how they looked, and nailed it."

The filmmaker emphasized not all of his working relationships with actresses have gone so smoothly, however.

"When I've heard that there are people who are difficult, I've almost always said, 'no.' You know, a kind of 'life's too short' thing. This one time, on Alias, an actress who will remain unnamed came in and she was so... and sort of famously so, but she was very rude to people and literally made a couple of people on the crew cry," Abrams dished. "So, a couple of weeks later after she was done, I got a call, some producer wanted her maybe for another project. And I said: 'You cannot hire this person. She was a disaster. She was horrible.' He was like, 'Thank you very much' and didn't hire her. A week went by and I got a call from the actress. ... She's like, 'I heard you said don't hire me.' And I said, 'You were a disaster; what are you talking about?' But I think it was one of the only times I hired someone, even though I knew that was going to happen and it happened."

Tom Cruise, the producer-star of Mission: Impossible III, was the absolute opposite of this difficult woman, Abrams said.

"It was really fun to do. It was the first movie I got to direct. Tom Cruise offered me this movie after seeing the first couple of seasons of Alias, which was insane," he recalled. "Every day, he was the greatest. He was incredibly collaborative. He was the producer, also, and was so great and smart and helpful. I've never seen anyone work harder and then when I went to do Star Trek, which was the next movie I did, it was weird not having Tom there because Tom was like this force of nature. Every day, I'd go to work, I'd know there would be someone working at least as hard as I was, if not [more] and I was never the one jumping off buildings." 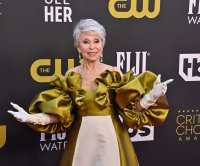 Movies // 6 hours ago
Rita Moreno joins 'Fast X' cast as Vin Diesel's grandmother
May 24 (UPI) -- Vin Diesel announced on Instagram Tuesday that Rita Moreno will be starring in "Fast X" as his grandmother.

Movies // 1 day ago
'The Gray Man': Chris Evans is 'unstoppable' in poster for new film
May 23 (UPI) -- Chris Evans, Ryan Gosling and Ana de Armas appear in posters for the Netflix action film "The Gray Man."

Movies // 1 day ago
'Moonage Daydream': David Bowie reflects on life in teaser trailer for documentary
May 23 (UPI) -- "Moonage Daydream," a new film featuring never-before-seen footage of and performances by David Bowie, opens in theaters in the fall.
Advertisement