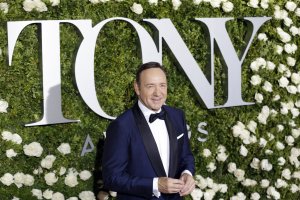 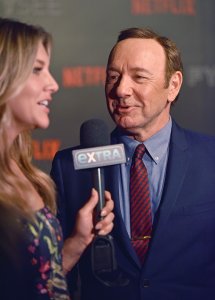 U.S. News // 1 year ago
Judge rules Kevin Spacey accuser must identify himself for civil case to continue
A federal judge ruled that a man identified only by the initials "C.D.," who accused Kevin Spacey of sexual assault in 1981, must reveal his identity for civil proceedings against the actor to continue.

U.S. News // 1 year ago
2 actors file suit in NYC accusing Kevin Spacey of child sex assault
Two men have filed a civil lawsuit against actor Kevin Spacey, accusing the two-time Oscar winner of sexual assaulting them when they were teenagers in the 1980s.

To some degree they're taking advantage of the fact that I'm a well-known actor and using it as a headline in their stories to sell papers. This is what they do

It was a movie that couldn't get made. What happens is that sometimes in the Hollywood perception, a movie gets in trouble and then it becomes this thing where you're trying to push the film uphill

I began working with Roger Kellaway, who worked with Bobby as a musical director and accompanist, in 1999 long before there was a script or money to make the movie

We certainly don't want them ringing and people ignoring them, pretending that it's not theirs

Kevin Spacey, CBE (born Kevin Spacey Fowler; July 26, 1959) is an American actor, director, screenwriter, producer, and crooner. He grew up in California, and began his career as a stage actor during the 1980s, before being cast in supporting roles in film and television. He gained critical acclaim in the early 1990s, culminating in his first Academy Award for The Usual Suspects (Best Supporting Actor), followed by a Best Actor Academy Award win for American Beauty (1999). His other starring roles in Hollywood include Seven, L.A. Confidential, Pay It Forward, and Superman Returns in a career which has earned him several Emmy and Golden Globe nominations. Since 2003, he has been artistic director of the Old Vic theatre in London.

Spacey is of English and Welsh descent, and was born in South Orange, New Jersey, the younger son of Kathleen Ann (née Knutson; December 5, 1931 – March 19, 2003), a secretary, and Thomas Geoffrey Fowler (June 4, 1924 – December 24, 1992), a technical writer and data consultant. He has two older siblings: a sister, Julie, and a brother, Randy. He attended Northridge Military Academy, Canoga Park High School (in tenth and eleventh grades), and then Chatsworth High School in Chatsworth, Los Angeles, where he graduated valedictorian of his class. At Chatsworth High, he starred in the school's senior production of The Sound of Music, playing the part of Captain Georg von Trapp, opposite Mare Winningham's character, Maria.

While in high school, he took on his paternal grandmother's maiden name, "Spacey", originally a Yorkshire name, as his acting surname. Several reports have incorrectly suggested that he took his name in tribute to actor Spencer Tracy, combining Tracy's first and last names. He had tried to succeed as a stand-up comedian for several years, before attending the Juilliard School in New York City, where he studied drama, between 1979 and 1981. During this time period, Spacey performed stand-up comedy in bowling alley talent contests.

FULL ARTICLE AT WIKIPEDIA.ORG
This article is licensed under the GNU Free Documentation License.
It uses material from the Wikipedia article "Kevin Spacey."