Deutsches Filmmuseum in Frankfurt, Germany, has assembled a collection of Kubrick's effects for the first major retrospective of the U.S. director's work since he died in 1999, the New York Times reported Tuesday.

The show, which runs through July 4, also includes galleries at the Deutsches Architektur Museum next door.

The exhibit, including showings of Kubrick's films, was championed by Jan Harlan, the filmmaker's executive producer and brother-in-law.

Harlan tracked down numerous props from Kubrick's films, which include "2001: A Space Odyssey" and "Full Metal Jacket."

The show opened in Frankfurt because that was where the interest and funding were, Harlan said.

"In the absence of anybody else asking, I thought, Well, why not?'" Harlan said, adding he hopes the show eventually will make its way to New York, Kubrick's birthplace.

TV // 3 hours ago
Jean Smart: For stand-up comedy you 'have to be a good actor'
LOS ANGELES, May 13 (UPI) -- Emmy winner Jean Smart plays a veteran Las Vegas stand-up comic in new HBO series "Hacks," and says her years of being an actress helped her in the role. 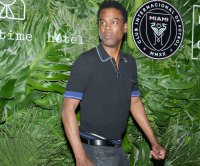