An F-16 fighter plane took off from Aviano Air Base, Italy, to participate in a U.S. Navy/U.S. Air Force joint exercise in the Black Sea. Photo by TSgt. Rebeccah Woodrow/U.S. 6th Fleet

Aug. 3 (UPI) -- The U.S. Navy and Air Force completed an unannounced joint training drill over the Black Sea, the U. S. 6th Fleet announced on Monday.

The training mission was conducted in international waters and airspace within the Black Sea as an opportunity for U.S. forces to integrate, operate and communicate while executing surface and air operations, a 6th Fleet statement on Monday said.

The guided-missile destroyer USS Porter, a P-8A Poseidon maritime patrol aircraft from Patrol Squadron VP-47 and four F-16 fighter planes of the 31st Fighter Wing stationed at Aviano Air Base, Italy, were involved with the drill, according to the 6th Fleet.

KC-135 Stratotankers from the 100th Aerial Refueling wing in Mildenhall, Britain, and an MQ-9 Reaper assigned to the 52nd Expeditionary Operations Group Detachment 2at Miroslawiec Air Base, Poland, were also involved.

"The purpose of this training event was to exercise command and control in a joint training environment with our U.S. Air Force brothers and sisters to increase our tactical proficiency, and Porter's crew did just that," said Cmdr. Craig Trent, Porter's commanding officer.

Although it was not mentioned in the statement, observers noted that the F-16s carried live air-to-air missiles, identifiable by yellow and brown bands painted on the missiles, according to The Aviationist.

It is unusual for aircraft to carry live air-to-air ordnance during drills, and the F-16s were armed with Advanced Medium-Range Air-to-Air Missile, or AMRAAM and Sidewinder missiles.

The drill's mission was different from the recently-concluded multi-nation Sea Breeze 2020 exercise, conducted in the Black Sea and involving the USS Porter. That exercise focused on air-to-surface cruise missile tactics and long-range anti-ship missile capabilities. 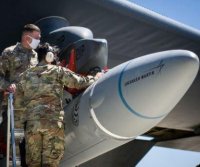