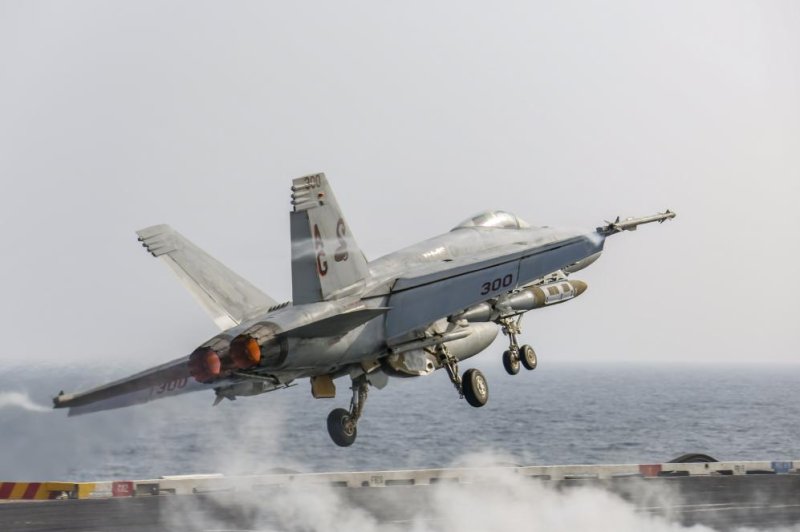 Sept. 25 (UPI) -- The F/A-18 E/F "Super Hornet" and EA-18G "Growler" fleets of the U.S. Navy have both reached 80 percent mission-capable readiness, a target mandated by the Secretary of Defense.

The year-long reforms took place across squadrons and included maintenance, supply depots and other readiness commands for 343 Super Hornet and 95 Growlers, Navy officials announced on Tuesday.

In the past, the Navy regularly sustained between 250 and 260 Super Hornets but surpassed 341, along with 93 mission-capable Growlers this month.

The Navy launched it's Naval Sustainment System initiative earlier this year as part of a branch-wide effort to improve readiness across the board. Aside from work on its aircraft fleets, the branch also has started working to improve the performance of its shipyards.

"This has been a year of results for Naval Aviation," Vice Adm. DeWolfe H. Miller said in a press release. "I am incredibly proud of our Sailors, civilian teammates and industry partners. They developed and implemented the NSS and then drove readiness numbers that haven't been seen in over a decade. Their results are incredible and their passion for improvement is inspirational."

In 2018, the Navy had only achieved about 50 percent readiness -- and last December officials thought the branch would come up short of the goal by this year's deadline. At the time, then-Secretary of Defense James Mattis commanded the Air Force, Navy and Marine Corps to aim for the new target.

That initiative, which initially focused on improving the F/A-18 Super Hornet fleet, began to include the Navy's EA-18G Growler fleet because both platforms share similarities.

Navy officials stress while meeting the 80 goal was important, it's not the ultimate goal.

"To be clear, there is no finish line to the NSS effort," Rear Adm. Roy Kelley, Commander, Naval Air Forces. "We don't get to choose when we are called to fight. Sustainment is the key. Continuously improving the reforms implemented by our military, civilian and industry teams will be critical in maintaining our advantage in this age of great power competition."

At the beginning of September, the Navy launched its Naval Sustainment System-Shipyards to enhance maintenance of its squadrons at intermediate and depot Fleet Readiness Centers. The six-week pilot program was implemented after officials testified about backlogs at naval shipyards around the United States.