A section of the U.S.-Mexico border fence is seen at Imperial Beach, California on June 10, 2019. File Photo by Kevin Dietsch/UPI | License Photo

Sept. 13 (UPI) -- The U.S. Air Force, in a report revealed Friday, said the planned $3.6 billion diversion of military funds for a border wall is a risk of national security.

The report, obtained by NBC News, outlines 51 military projects scheduled to lose funding, and their importance to national security.

Contraction projects supporting the European Defense Initiative, which deters Russian aggression in Europe, is among the most notable. It cites that without properly constructed buildings, personnel and 12 F/A-22 fighter planes at Spangdahlem Air Base in Germany "will have no shelter facilities in case of enemy attack, making the assets vulnerable to destruction."

Funding for airport upgrades in Germany, Luxembourg, Great Britain, Slovakia and Hungary have been cancelled because of the request to divert funding.

The list also includes an entry-control point at the Incirlik Air Base in Turkey, a construction project at Andersen AFB in Guam to protect over $1 billion in munitions and replacement of a boiler at Eielsen AFB in Alaska, whose failure would prompt evacuation of the base, which sustains seasonal temperatures of 65 degrees below zero.

Funding to rebuild facilities in Puerto Rico damaged by hurricanes are also included on the list.

Over half the cuts, totaling $1.8 billion, are to projects at overseas bases, but states will lose millions in military construction projects as part of the plan.

"I'm deeply concerned about President Trump's plan to pull funding from critical national security projects, including millions of dollars from important projects in Virginia, so he can build his border wall," Sen. Tim Kaine, D-Va., said in a statement. "The well-being of American troops is the core responsibility of every commander in the military, yet the commander in chief is shirking that duty so he can advance his own political agenda."

President Donald Trump promised in his 2016 presidential campaign to build a wall on the 1,954-mile U.S.-Mexico border. In February 2019, he declared a national emergency in an effort to circumvent Congress and pay for the wall he had promised to build with funding from Mexico. The cut in Air Force funding would be used to pay for 175 miles of wall.

The Air Force only learned last week which of its projects will be affected. The reallocation was approved by the Pentagon on September 3.

Defense News // 5 hours ago
Malfunctioning B-2 bomber damaged during landing at Missouri base
Sept. 16 (UPI) -- A B-2 Spirit stealth bomber made an emergency landing at Whiteman Air Force Base in Missouri earlier this week after the high-tech aircraft malfunctioned during a training flight. 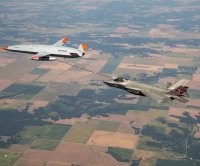