Stanford, who has not been charged with any crime, was served with a civil action filed Tuesday by the Securities and Exchange Commission, The Washington Post reported. Stanford vanished Tuesday, and the FBI would not say how he was tracked to Fredericksburg, Va.

The SEC claims the Stanford Group cheated investors who bought certificates of deposit held in his Antigua bank. Critics say the SEC ignored warnings for years that something was amiss in Stanford's operations, as the agency allegedly did in the case of accused Wall Street fraud Bernard Madoff.

MarketWatch reported Thursday that Stanford's office in Antigua consisted of two rooms with an old typewriter and out-of-date telephone book on the receptionist's desk. His auditor, CAS Hewlett & Co., operates out of a one-room office above a hair salon in North London, the report said.

Employees of Stanford's companies were kept in the dark about how the firm's investments operated, MarketWatch said. A year ago, two advisers in Houston sued Stanford for wrongful dismissal claiming they were forced to resign after expressing their concerns about the business. 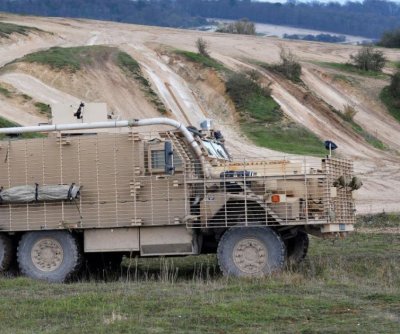 Defense News // 18 hours ago
British army to cut armored vehicles acquired for war in Afghanistan
July 13 (UPI) -- Massive armored trucks of the British Army now have little use and will be culled from the fleet, a plan revealed this month indicates.