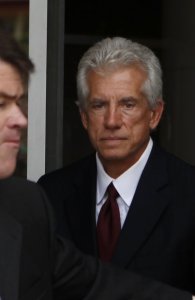 Robert Allen Stanford (born March 24, 1950) is a prominent financier, philanthropist, and sponsor of professional sports who has been charged with fraud. Stanford is the chairman of the privately held, wholly owned Stanford Financial Group of Companies. A fifth-generation Texan who resides in St. Croix, U.S. Virgin Islands, he holds dual citizenship, being a citizen of Antigua and Barbuda and a United States citizen.

In early 2009, Stanford became the subject of several fraud investigations, and on February 17, 2009, was charged by the U.S. Securities and Exchange Commission with fraud and multiple violations of U.S. securities laws for alleged "massive ongoing fraud" involving $8 billion in certificates of deposits. The FBI raided three of Stanford's offices in Houston, Memphis, and Tupelo, Mississippi. On February 27, 2009, the SEC amended its complaint to describe the alleged fraud as a "massive Ponzi scheme". He was arrested by the FBI on June 18, 2009.

Stanford grew up in Mexia, Texas. His father, James Stanford, is former mayor of Mexia and a member of the Board of Directors of Stanford Financial Group. His mother, Sammie, is a nurse. After his parents divorced in 1959, Stanford and his brother went to live with their mother. Both of his parents remarried.

FULL ARTICLE AT WIKIPEDIA.ORG
This article is licensed under the GNU Free Documentation License.
It uses material from the Wikipedia article "Allen Stanford."