City residents flocked to police and fire stations to turn in Tylenol products at the urging of Mayor Jane M. Byrne, and Illinois Attorney General Tyrone Fahner said the FBI had entered the case in a massive search for 'a madman hell-bent on doing something like this.'

Pain-sufferers nationwide were urged not to take any Extra-Strength Tylenol capsules until the mystery is solved. Tylenol is the nation's largest selling over-the-counter pain reliever with 37 percent of the analgesics market.

'We're collecting whatever people bring in,' Deputy Police Chief Raymond Clark said after the mayor's midnight plea for residents to turn in all Tylenol products. 'We take their names, addresses, location of the establishment where they bought it, the date if they can recall it. This will be helpful in backtracking.'

An autopsy on a possible eighth victim, an 18-year-old boy who collapsed late Friday, proved he did not die of cyanide poisoning, Cook County Medical Examiner Dr. Robert Stein told a news conference.

The investigation focused sharply on the Chicago area after authorities also ruled out the death of a 72-year-old man in Houston, Texas, and the sudden illness of a 49-year-old Cleveland, Ohio, woman.

Investigators said they believed the capsules were adulterated close to the point of sale -- not during production or shipment, Dr. Michael I. Shaeffer of the Cook Cook County Medical Examiner's Office said.

The cyanide compound is a corrosive agent that would deteriorate the gelatin shell of the capsule rather quickly, Shaeffer said.

Tests confirmed cyanide from Extra-Strength Tylenol was in the bloodstream of Ms. Prince, 35, a Chicago-based flight attendant for United Airlines. Ms. Prince, who was last seen late Wednesday, was the city's first victim. The others were from the suburbs.

Ms. Prince's body was found late Friday half-in a closet of her high-rise apartment on the near North Side. Police found an open bottle of Extra-Strength Tylenol on the bathroom sink.

Schaeffer said he found one capsule containing poison 100 times stronger than the sample used as a comparison.

The autopsy for Patrick Moore, 18, of Summit, showed he did not die of cyanide poisoning. Additional tests were being conducted to determine the exact cause of death. He collapsed late Friday while at work and died a short time later at Community Memorial General Hospital in LaGrange.

At an unusual midnight news conference, Mayor Byrne announced city health inspectors Saturday would start to enforce the removal of the Extra-Strength capsules. 'Don't take Tylenol,' she warned -- not even tablet or liquid form.

She urged families to remove all Tylenol products from their homes and turn them into nearby police and fire stations with information on when they purchased the product and where. Police said residents were complying with her request.

The manufacturer, McNeil Consumer Products Co. of Fort Washington, Pa., a subsidiary of Johnson & Johnson, said the capsules were 'tampered with and cyanide poision added to some of the capsules.' The company offered a $100,000 reward for information leading to the tamperer.

McNeil recalled two lot numbers, MC2880 and 1910MD, in some 264,000 bottles from store shelves nationwide. Other lot numbers have been found in the victims' possession.

Illinois Gov. James R. Thompson said the state was pouring millions of dollars into the hunt 'for the mad Tylenol killer, a killer or killers who is putting a state, indeed a nation, into fear.'

A psychological profile was being prepared in efforts to find the killer, who authorities said might be a disgruntled warehouse or store employee.

Mary Reiner, 27, of Winfield, died Thursday at the same hospital she left a week ago after delivering her fourth child. Mary McFarland, 31, of Elmhurst, died the same day.

The contamination capsules were traced to Jewel-Osco stores in Arlington Heights and Elk Grove Village, Frank's Finer Foods in Winfield and a North Side Chicago Walgreen drug store.

In addition, the Food and Drug Administration said tests 'found cyanide in seven capsules' from a bottle retrieved from a suburban Schaumburg drug store. It was the first time the FDA isolated the poison before someone took the capsules.

Odd News // 17 hours ago
Message in a bottle travels 30 miles in just seven days
June 11 (UPI) -- A British family who launched some messages in a miniature bottles into the water said they were surprised when one was found 30 miles away -- after only one week.

Odd News // 17 hours ago
Otter found hiding in engine of parked car in Scotland
June 11 (UPI) -- Animal rescuers in Scotland responded to a "very unusual" situation when a resident discovered an otter was hiding in the engine compartment under the hood of their car.

Odd News // 21 hours ago
Firefighters free raccoon with head stuck in sewer cover
June 11 (UPI) -- Firefighters in Michigan came to the rescue of an unlucky raccoon that ended up with its head stuck through the hole in a sewer cover. 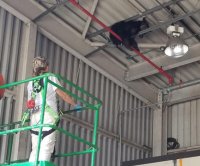