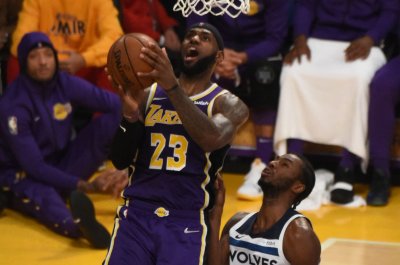 NBA // 2 years ago
Utah Jazz seek to defend better versus Los Angeles Lakers
The Utah Jazz haven't been as stifling on defense this season, and they'll face one of the hotter offensive teams when they visit the Los Angeles Lakers.

NBA // 2 years ago
Lakers, LeBron James visit Sacramento
LeBron James will make his first visit to the California capital as a state resident Saturday night when the Los Angeles Lakers take on the Sacramento Kings.

NBA // 2 years ago
Celtics, Suns try to get on track
PHOENIX -- Boston is in a bit of a funk after losing the first two games of its five-game road trip, and a frustrated Kyrie Irving is out $25,000 after throwing a ball into the stands after the latest loss in Denver.

Tyson Cleotis Chandler (born October 2, 1982) is an American professional basketball center for the Dallas Mavericks of the NBA. He was also a member of the United States men's national basketball team.

Chandler attended Dominguez High School in Compton. He earned accolades from Parade Magazine and USA Today, and was selected to the McDonald's High School All-America Team. As a 6'11" freshman, he was profiled on current affairs TV program 60 Minutes. Chandler led Dominguez to a state championship before declaring as an early entry candidate in the 2001 NBA Draft.

Tyson Chandler was selected 2nd overall by the Los Angeles Clippers, who immediately traded his rights to the Chicago Bulls for former NBA Rookie of the Year Award recipient Elton Brand. The Bulls intended to pair Chandler with fellow high school phenomenon Eddy Curry in the front court. However, while both players had stretches of success during their time with the Bulls, they rarely coincided. In Chandler's case, back problems were a recurring issue throughout his career, particularly during the 2003–04 season. During the early part of his career, Chandler feuded with Brendan Haywood of the Washington Wizards and Amar'e Stoudemire of the Phoenix Suns. Later, although the feuds became less frequent, Chandler struggled with foul trouble, which limited his playing time.

FULL ARTICLE AT WIKIPEDIA.ORG
This article is licensed under the GNU Free Documentation License.
It uses material from the Wikipedia article "Tyson Chandler."
Back to Article
/