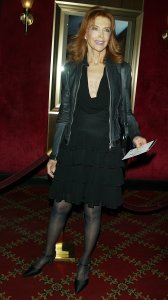 Top News // 4 years ago
The Almanac
On Feb. 11, 1990, Nelson Mandela, leader of the movement to end South African apartheid, was released after 27 years in prison.

Tina Louise (born February 11, 1934) is the stage name of Tatiana Blacker, an American model, singer and actress. She is known for her role as "movie star" Ginger Grant on the TV sitcom Gilligan's Island.

Louise was born Tatiana Josivovna Chernova Blacker in New York City of Jewish heritage, the only child of a Brooklyn candy store owner. She attended Miami University in Oxford, Ohio. Louise began her career as a model and nightclub singer while she studied at the Neighborhood Playhouse. She appeared on the cover of scores of pinup magazines such as Adam, Sir! and Modern Man, and posed for semi-nude pictorials for Playboy (May 1958, April 1959). Her acting debut came in 1952 in the Bette Davis musical revue Two's Company, followed by roles in other Broadway productions, such as John Murray Anderson's Almanac, The Fifth Season, Pipe Dream, and Will Success Spoil Rock Hunter?. She also appeared in such early live TV dramas as Studio One, Producers' Showcase, and Appointment with Adventure.

In 1957, she and Julie Newmar appeared on Broadway in the hit musical Li'l Abner. Her album It's Time for Tina was also released that year, with songs such as "Embraceable You" and "I'm in the Mood for Love."

FULL ARTICLE AT WIKIPEDIA.ORG
This article is licensed under the GNU Free Documentation License.
It uses material from the Wikipedia article "Tina Louise."
Back to Article
/