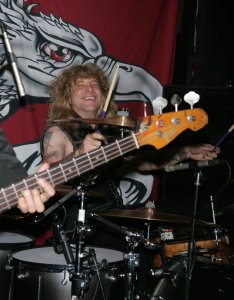 Steven Adler (born January 22, 1965 in Cleveland, Ohio) is a well known American rock drummer. He is most famous for his tenure as a member of the hard rock band Guns N' Roses, with whom he performed and recorded from 1985 to 1990.

Steven Adler was born on January 22, 1965 in Cleveland, Ohio. He was born into the Jewish faith and has some Icelandic heritage.

Adler moved to Los Angeles with his mother, Deanna, and older brother Kenny, as a young child. His mother re-married to Melvin Adler and had another child, Jamie. Steven was forced to be on his own at age 11 when he came home one day to find all of his belongings packed up on the sidewalk. He attended PCS (Provo Canyon School) at the age of 16-17. Steven's younger brother Jamie is a booking agent for such hip-hop acts as Bone Thugs N' Harmony and Tyrese. Most informed people close to Adler believe that his mother and stepfather squandered most of his money (10-20 million dollars) gambling in Las Vegas where Mel Adler was a high-roller who liked to frequent Caesar's Palace. Steven's nephew, Max, is also involved in the entertainment business producing stage-shows in Las Vegas and several reality television shows.

FULL ARTICLE AT WIKIPEDIA.ORG
This article is licensed under the GNU Free Documentation License.
It uses material from the Wikipedia article "Steven Adler."