Sports News // 3 years ago
Novak Djokovic breezes into third round at Wimbledon
Second-seeded Novak Djokovic continued in his bid to win his fourth Wimbledon title by breezing to a 6-2, 6-2, 6-1 victory over Czech Adam Pavlasek on Thursday in a second-round match at the All England Club in London.

Tennis // 4 years ago
Grigor Dimitrov reaches semis in home country of Bulgaria
Third-seeded Grigor Dimitrov delighted the home fans with a 6-3, 6-3 victory over. 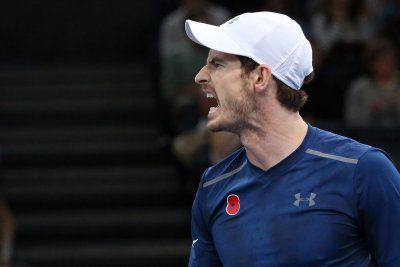 Tennis // 4 years ago
Andy Murray advances in Australian Open
Sam Querrey pulled the upset of Wimbledon last year, stunning top-seeded Novak Djokovic of Serbia, but couldn't duplicate the feat at the Australian Open, falling 6-4, 6-2, 6-4 to top-seeded Andy Murray in the third round.

Darcis won his first ATP World Tour event at the Dutch Open in July 2007 and achieved his first top-100 ranking on 26 November 2007 by winning a Challenger event in Finland.

Darcis competed at the 2008 Australian Open and French Open, losing in the first round in both. He and Olivier Rochus, however, reached the quarter finals of the doubles tournament at the French Open. He reached the second round at the US Open. He won a second ATP event at Memphis in March 2008.

FULL ARTICLE AT WIKIPEDIA.ORG
This article is licensed under the GNU Free Documentation License.
It uses material from the Wikipedia article "Steve Darcis."
Back to Article
/