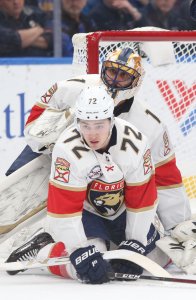 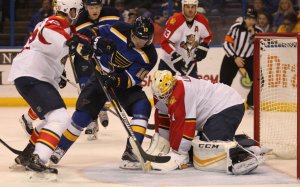 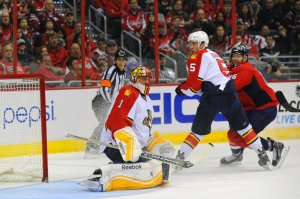 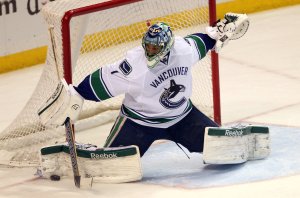 NHL // 3 years ago
Blues' Robert Bortuzzo scores goal off referee from impossible angle
St. Louis Blues defenseman Robert Bortuzzo hit a referee with the puck before it bounced into the goal during a win against the Florida Panthers.

NHL // 3 years ago
Avs aim to start new streak vs. Panthers
SUNRISE, Fla. -- The Colorado Avalanche will be ready when they visit the Florida Panthers on Thursday night, and that is -- essentially -- a promise.

NHL // 3 years ago
Panthers begin eight-game homestand against Blackhawks
SUNRISE, Fla. -- The Florida Panthers, in dire need of a home game, will get just that on Saturday night when the Chicago Blackhawks visit the BB&T Center.

Sports News // 3 years ago
Panthers look to extend winning streak at Blue Jackets
The Florida Panthers roll into Columbus for a Thursday matchup against the Blue Jackets with a five-game winning streak after a 2-1 victory on Tuesday night on the road over the Philadelphia Flyers.

Sports News // 3 years ago
Streaking Flyers host Panthers
Back on Oct. 16, the Flyers blew a three-goal lead but managed to pull out a 6-5 shootout victory over the Florida Panthers in Philadelphia.

NHL // 3 years ago
Panthers begin important stretch vs. Oilers
This wasn't supposed to happen. The Florida Panthers started slowly last year, but -- from Jan. 30 to the end of the regular season -- were the best team in the Eastern Conference, falling just one point short of the playoffs.

This is a great day for me and my family

Roberto Luongo (English pronunciation: /luːˈɒŋɡoʊ/; born April 4, 1979) is a Canadian professional ice hockey goaltender for the Vancouver Canucks of the National Hockey League (NHL). Born in Montreal, Quebec, he is of Italian and Irish ancestry. He employs the butterfly style of goaltending and has previously played in the NHL for the New York Islanders and the Florida Panthers. Luongo has been a finalist for the Vezina Trophy as the league's best goaltender (2004, 2007 and 2011), the Lester B. Pearson Award as the top player voted by his peers (2004 and 2007) and the Hart Memorial Trophy as the league's most valuable player (2007). He won the William M. Jennings Trophy for lowest team goals-against average for the 2010-2011 season.

Luongo played junior hockey in the Quebec Major Junior Hockey League (QMJHL) for the Val-d'Or Foreurs and the Acadie-Bathurst Titan, winning back-to-back President's Cups and establishing the league's all-time playoff records in games played and wins. Following his second QMJHL season, Luongo was selected fourth overall by the Islanders in the 1997 NHL Entry Draft. After splitting his professional rookie season between the Islanders and their American Hockey League (AHL) affiliate, the Lowell Lock Monsters in 1999–2000, he was traded to the Panthers. In five seasons with Florida, Luongo established team records for most all-time games played, wins and shutouts. During the 2006 off-season, he was traded to the Canucks after failed contract negotations with the Panthers. Following his second season with the Canucks, he became the first NHL goaltender to serve as a team captain since Bill Durnan in the 1947–48 season. Luongo served in that capacity for two seasons before resigning from the position before the 2010–11 season.

Internationally, Luongo has competed for Team Canada in numerous tournaments. As a junior, he won a silver medal at the 1999 World Junior Championships, while being named Best Goaltender in his second tournament appearance. Luongo has won two gold medals at the 2003 and 2004 World Championships and a silver in the 2005 World Championships. He also won the 2004 World Cup championship and appeared in the 2006 Winter Olympics in Turin as a backup to Martin Brodeur in both instances. He succeeded Brodeur as Canada's starting goaltender during the 2010 Winter Olympics in Vancouver, winning a gold medal.

FULL ARTICLE AT WIKIPEDIA.ORG
This article is licensed under the GNU Free Documentation License.
It uses material from the Wikipedia article "Roberto Luongo."