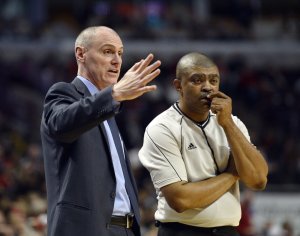 NBA // 3 months ago
Mavericks' Luka Doncic hits clutch jumper to hold off late run by Celtics
Luka Doncic rose over two defenders and drained a deep 3-pointer with less than a second remaining to lead his Dallas Mavericks to a dramatic win over the Boston Celtics Tuesday night.

NBA // 9 months ago
Luka Doncic stuns Clippers with OT buzzer-beater; 76ers, Nets eliminated
Luka Doncic, playing on an injured ankle, stepped back and drained a deep 3-point shot at the buzzer to give the short-handed Dallas Mavericks a 135-133 overtime win over the Los Angeles Clippers.

NBA // 1 year ago
NBA's plans for older coaches on bench in limbo amid pandemic precautions
NBA Commissioner Adam Silver said older coaches in the league could be prohibited from sitting on the bench at games when the league returns from a coronavirus-related suspension, due to safety precautions.

I think Detroit is very understaffed security wise, having been there for two years

I felt like I was fighting for my life out there

Richard Preston Carlisle (pronounced KAHR-lye-uhl) (born October 27, 1959 in Ogdensburg, New York) is the head coach of the NBA's Dallas Mavericks. He has also coached the Indiana Pacers and Detroit Pistons, and was previously a player in the NBA.

Carlisle was raised in Lisbon, New York. He graduated from Worcester Academy and played two years of college basketball at the University of Maine before transferring to the University of Virginia, where he co-captained the Cavaliers to the Final Four in 1984. After graduating that same year, he was drafted by the Boston Celtics (23rd pick in the third round), where he played alongside Larry Bird on the Celtics' 1986 NBA Championship team. With the Celtics, he averaged 2.2 points, 1.0 assists and 0.8 rebounds per game in a limited reserve role.

FULL ARTICLE AT WIKIPEDIA.ORG
This article is licensed under the GNU Free Documentation License.
It uses material from the Wikipedia article "Rick Carlisle."
Back to Article
/