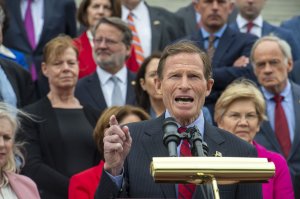 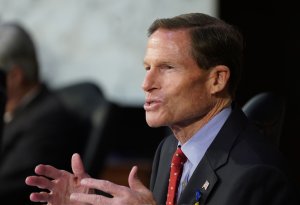 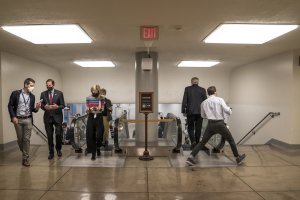 U.S. News // 2 months ago
Watch live: Ukraine, COVID-19 among crises facing Biden for 1st State of the Union
President Joe Biden is set to deliver his first State of the Union address on Tuesday night, perhaps facing more concurrent crises in his inaugural speech than any other president in modern history.

U.S. News // 3 months ago
Bill intended to protect children online prompts outcry from privacy advocates
The revived EARN IT Act is supposed to hold tech giants accountable for the spread of child sexual abuse material, but privacy advocates say it could disincentivize companies from using encryption.

U.S. News // 3 months ago
Senate narrowly confirms Dr. Robert Califf, Biden's pick to lead FDA
With a 50-46 vote, the Senate on Tuesday confirmed Dr. Robert Califf to become the next Food and Drug Administration commissioner -- filling a key post that's had only an interim chief for much of the COVID-19 pandemic.

U.S. News // 3 months ago
FCC nominee Gigi Sohn addresses concerns at second confirmation hearing
In her second appearance before the Senate Commerce Committee, Gigi Sohn, nominated to be a Federal Communications Commission commissioner, faced repeated Republican questioning Wednesday whether she could be impartial.

World News // 4 months ago
Bipartisan U.S. Senate delegation meets with Ukraine leaders in Kyiv
A bipartisan group of seven U.S. senators met with Ukrainian President Volodymyr Zelensky in Kyiv Monday in a show of support for the country against possible Russian military aggression.

These measures are a solid next step, not a complete solution

Richard Blumenthal (born February 13, 1946) is the junior United States Senator from Connecticut and a member of the Democratic Party. Previously, he served as Attorney General of Connecticut.

Born in Brooklyn, New York, Blumenthal is a graduate of Harvard College, where he was editorial chairman of The Harvard Crimson. He studied for a year at Cambridge University in England before attending Yale Law School, where he was editor-in-chief of the Yale Law Journal. While at Yale, he was classmates with future President Bill Clinton and future Secretary of State Hillary Rodham Clinton. From 1970 to 1976 Blumenthal served in the United States Marine Corps Reserve, where he earned the rank of sergeant.

After college Blumenthal served as administrative assistant and law clerk for several Washington figures. From 1977 to 1981 he was United States Attorney for the District of Connecticut. In the early 1980s he worked in private law, including volunteer counsel for the NAACP Legal Defense Fund. He served in the Connecticut House of Representatives from 1984 to 1987, when he was elected to the Connecticut Senate. He was elected state Attorney General in 1990, and served for twenty years. During this period he was frequently speculated as a contender for Governor of Connecticut, but he never pursued the office.

FULL ARTICLE AT WIKIPEDIA.ORG
This article is licensed under the GNU Free Documentation License.
It uses material from the Wikipedia article "Richard Blumenthal."