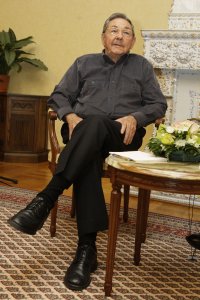 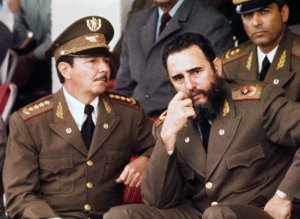 Energy News // 2 years ago
Cuba gives one of the permits needed for oil drilling
The Cuban government has signed off on an environment license that could pave the way to drilling for oil onshore, an Australian energy company said.

World News // 2 years ago
Raul Castro to remain president of Cuba until April
Cuban President Raul Castro will remain in office until April, the country's government announced on Thursday.

When the president of Cuba (Raul Castro) said he was ready to discuss any topic with the U.S. president, he meant he was not afraid of addressing any issue

A president is coming in who has raised a lot of expectations in many parts of the world, hopes that are too high, I think

I have referred to an excess of prohibitions and regulations, and in the next few weeks we'll start lifting the most simple of them

Raúl Modesto Castro Ruz (born 3 June 1931) is a Cuban politician and revolutionary who has been President of the Council of State and the Council of Ministers of Cuba since 2008; he previously exercised presidential powers in an acting capacity from 2006 to 2008. Raúl Castro was a rebel commander during the 1950s; after his older brother, Fidel Castro, took power, Raúl Castro was one of the most important figures in the new regime, serving as Minister of the Armed Forces from 1959 to 2008. As President, he is Commander in Chief of the Armed Forces (Army, Navy, and Air Force) and has also been First Secretary of the Central Committee of the Communist Party of Cuba (PCC) since 2011.

Raúl Castro was officially elected as President by the National Assembly on 24 February 2008, after Fidel Castro, who was still ailing, announced his intention not to stand for President again on 19 February 2008.

FULL ARTICLE AT WIKIPEDIA.ORG
This article is licensed under the GNU Free Documentation License.
It uses material from the Wikipedia article "Raul Castro."
Back to Article
/