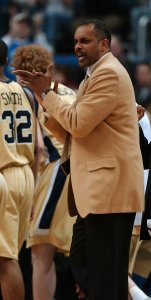 I reached out to his agent (Saturday night). He called me (Sunday)

Lewis has been presented with several options, but has been resolute about staying in school at Georgia Tech if at all possible

We have decided to shut him down and give him every chance to be 100 percent healthy before we start the regular season on Nov. 10

The bottom line is everybody is going through injuries now. It's that time of the year

Paul Harrington Hewitt (born May 4, 1963 in Kingston, Jamaica) is an American college basketball coach at George Mason University and most notably the former head coach at Georgia Institute of Technology (Georgia Tech). He grew up in Westbury, New York.

Hewitt was head coach of the Georgia Tech men's college basketball team from 2000 to 2011. During the 2004 NCAA Men's Division I Basketball Tournament, he led them to the championship game against Connecticut. In 2005 he signed a contract extension that automatically rolls over every April, giving him a new 6-year contract. On March 12, 2011, he was fired from his head coaching position at Georgia Tech with a $7.2 million buyout.

FULL ARTICLE AT WIKIPEDIA.ORG
This article is licensed under the GNU Free Documentation License.
It uses material from the Wikipedia article "Paul Hewitt."
Back to Article
/