MLB // 2 years ago
Giants will be without Posey in series finale vs. Rangers
SAN FRANCISCO -- The San Francisco Giants hoisted the white flag on their 2018 season Saturday, scheduling standout catcher Buster Posey for season-ending hip surgery with 31 games still remaining.

MLB // 2 years ago
Dodgers, Mariners set for series of playoff contenders
The Los Angeles Dodgers and Seattle Mariners both had Thursday off entering their three-game series at Safeco Field. 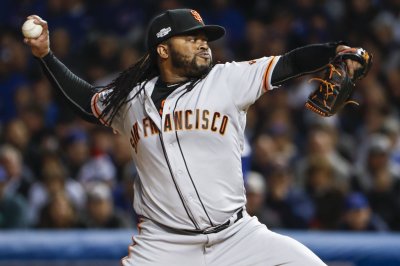 MLB // 2 years ago
Cueto, Giants take aim at Cubs
SAN FRANCISCO -- Johnny Cueto is scheduled to make his second start since returning from a two-month absence but could find himself throwing to a substitute batterymate when the San Francisco Giants and Chicago Cubs continue their three-game series on Tuesday night.

MLB // 2 years ago
Giants seek better results in rematch with Marlins
The San Francisco Giants will be out to avenge a series defeat last week when they get a rematch with the Miami Marlins. 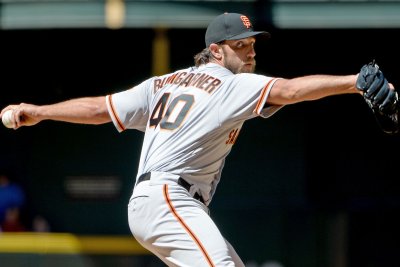 MLB // 2 years ago
Marlins beat Giants despite balking and walking in runs
The Miami Marlins rallied from a 4-2 deficit to beat the San Francisco Giants in a series opener at Marlins Park.

MLB // 2 years ago
Scherzer, Nationals wrap up series with Giants
WASHINGTON -- It has been a rough week for the Washington Nationals' starting rotation.

Nicholas John Hundley (born September 8, 1983, in Corvallis, Oregon) is a Major League Baseball catcher for the San Diego Padres. He was called up to the majors for the first time on July 3, 2008. As a 12-year-old he played on the Santa Clarita Mudcats. Other Mudcats alumni are Ryan Braun and James Shields. On July 26, 2008, Hundley hit his first career home run against the Pittsburgh Pirates.

Against the Florida Marlins on August 21, 2011, Hundley hit his fifth triple of the season, tying the Padres single season record for triples by a catcher set by Benito Santiago in 1990. It was also Hundley's fourth triple in his last six games.

FULL ARTICLE AT WIKIPEDIA.ORG
This article is licensed under the GNU Free Documentation License.
It uses material from the Wikipedia article "Nick Hundley."
Back to Article
/