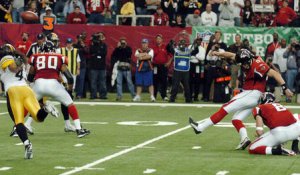 NFL // 3 years ago
NFL notebook: Bears G Long reportedly out 6-8 weeks
Chicago Bears guard Kyle Long is expected to be sidelined six-to-eight weeks after sustaining a foot injury in the team's 24-10 win over the New York Jets, according to a published report Wednesday.

NFL // 3 years ago
Fantasy Football Who's In, Who's Out: Week 8 NFL injury report
Coming off a Thursday night game in which the Houston Texans lost Will Fuller for the season with a torn ACL, several other teams declared their receivers out.

NFL // 3 years ago
Ageless Adam Vinatieri ailing for Indianapolis Colts
INDIANAPOLIS -- It isn't often that the first topic broached on the day after an NFL game is the kicker.

NFL // 3 years ago
Struggling Colts still have 'positive outlook'
INDIANAPOLIS -- His team is mired in a four-game losing streak, so the noise in the outside world couldn't be more negative about the Indianapolis Colts.

NFL // 3 years ago
Colts' Frank Reich stands by 'risky' overtime decision
After having a night to sleep on it, Indianapolis Colts head coach Frank Reich reiterated he would have made the same decision to go for a win in overtime.

NFL // 3 years ago
Texans claim first win in overtime over Colts
At the end of a wild overtime test of endurance, Indianapolis Colts head coach Frank Reich wasn't about to settle for a tie with the Houston Texans.

Morten Andersen (born August 19, 1960 in Copenhagen, Denmark), nicknamed "The Great Dane", is a former National Football League kicker. He holds the distinction of being the all-time leading scorer in NFL history, as well as being the all-time leading scorer for two different teams; the New Orleans Saints, with whom he spent 13 seasons, and the Atlanta Falcons, with whom he spent a combined eight seasons.

He officially retired December 8, 2008, after not having played all season.

Andersen was born in Copenhagen and raised in the west Jutland town of Struer, Denmark. As a student, he was a gymnast and a long jumper, and barely missed becoming a member of the Danish junior national soccer team. He visited the United States in 1977 as a Youth For Understanding exchange student. He first kicked an American football on a whim at Ben Davis High School in Indianapolis. He was so impressive in his one season of high school football that he was given a scholarship to Michigan State University.

FULL ARTICLE AT WIKIPEDIA.ORG
This article is licensed under the GNU Free Documentation License.
It uses material from the Wikipedia article "Morten Andersen."