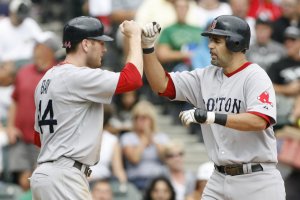 MLB // 1 year ago
David Ortiz's ex-teammates show support after former MLB star's shooting
The Major League Baseball community is showing support for former Boston Red Sox star David Ortiz, who was shot in the back in the Dominican Republic on Sunday night.

I know it's a freak thing, but I still feel like I'm letting the guys down

Michael Averett Lowell (born February 24, 1974) is a Major League Baseball player for the Boston Red Sox. He is a right-handed batter, and previously played with the Florida Marlins (1999–2005).

Lowell, was born in Puerto Rico to Carl and Beatriz Lowell. His parents were born in Cuba, and are of Irish and Spanish ancestry. His family relocated to Miami, Florida when Mike Lowell was four years old. As a high school sophomore, he was chosen to play for the varsity baseball team at Christopher Columbus High School, but did not get any playing time, so he transferred to Coral Gables for his junior year.

In 1992, Lowell graduated from Coral Gables Senior High School in Coral Gables, Florida with a 4.0 GPA and where he was a star player on the baseball team. There, he met future wife Bertica, a member of the school's nationally recognized Gablettes dance team, of which she became coach years later. They have one daughter, Alexis Ileana Lowell, and one son named Anthony.

FULL ARTICLE AT WIKIPEDIA.ORG
This article is licensed under the GNU Free Documentation License.
It uses material from the Wikipedia article "Mike Lowell."
Back to Article
/