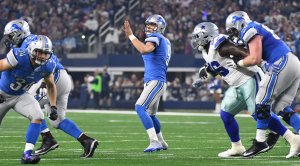 NFL // 2 years ago
DT Donald disrupted Lions in Rams win
The Los Angeles Rams weren't as crisp as usual on offense in their 30-16 win over the Detroit Lions on Sunday.

NFL // 2 years ago
Lions WR Marvin Jones ruled out vs. Panthers
Detroit Lions wide receiver Marvin Jones has been ruled out of Sunday's game against the Carolina Panthers.

NFL // 2 years ago
Colts QB Luck shoulders workload at record pace
Andrew Luck's surgically repaired shoulder is getting more of a test than either he or the Indianapolis Colts envisioned.

NFL // 2 years ago
Focal point for Lions: Slow Packers' Rodgers
The Detroit Lions swept the season series from the Green Bay Packers a year ago, but one more important component was missing from the bitter rivalry -- Aaron Rodgers.

John Matthew Stafford (born February 7, 1988 in Tampa, Florida) is an American football quarterback for the Detroit Lions of the National Football League. He was drafted by the Detroit Lions first overall in the 2009 NFL Draft. He played college football at Georgia.

Stafford made his varsity debut in the 2002 playoffs against Kilgore High. He lettered in baseball where he was teammates with future Los Angeles Dodgers pitcher Clayton Kershaw, but after a disappointing junior season in which he threw for only 1,748 yards, 18 TDs and 11 INTs, Stafford quit the baseball team to concentrate on football.

FULL ARTICLE AT WIKIPEDIA.ORG
This article is licensed under the GNU Free Documentation License.
It uses material from the Wikipedia article "Matt Stafford."
Back to Article
/