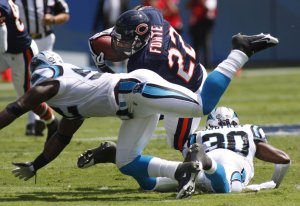 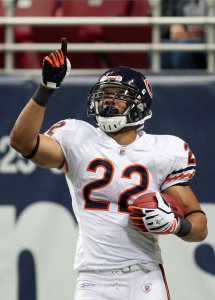 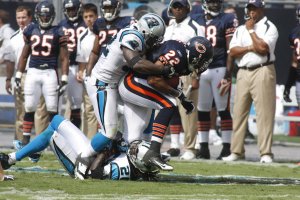 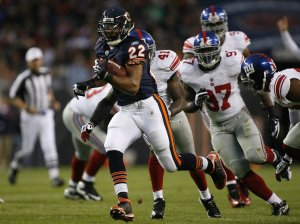 NFL // 1 year ago
Bears run defense will be tested by Rams' Todd Gurley
Bears linebacker Danny Trevathan wanted to discount the alarming trend facing his team's defense in the wake of Sunday's 30-27 loss to the New York Giants.

NFL // 2 years ago
Matt Forte wasn't joking about wanting to coach for Bears in 2018
Longtime Chicago Bears running back Matt Forte says he wasn't joking when he made a Twitter pitch to reunite with his former team as a coach.

NFL // 2 years ago
Notebook: Barkley's agent refutes report of demand
Saquon Barkley's agent denied a report in Sports Illustrated on Wednesday that the Penn State running back would make like Eli Manning and demand the Cleveland Browns not draft him.

NFL // 2 years ago
Hester, Forte will retire as Bears
Wide receiver Devin Hester and running back Matt Forte will sign one-day contracts with the Chicago Bears next Monday so they can retire as members of the organization in which they each spent the first eight seasons of their NFL careers.

NFL // 2 years ago
Jets still searching for QB in 2018
INDIANAPOLIS -- The New York Jets have no clue who their starting quarterback will be next season.

Matthew Garrett Forté (born December 10, 1985 in Lake Charles, Louisiana) is an American football running back for the Chicago Bears of the National Football League. He was drafted by the Bears in the second round of the 2008 NFL Draft. He played college football at Tulane.

Forté attended Slidell High School in Slidell, Louisiana and was an honor student and a letterman in football and track. In football, he was a two-time All-District and All-Parish selection, and as a senior, he was also named the team's Most Valuable Player, won All-Metro honors, was named the District 5-5A Offensive M.V.P., was named the Saint Tammany Parish Player of the Year, and garnered second team All-State honors. Matthew Garrett Forté graduated from Slidell High School in 2004.

Forté played NCAA Division I college football at Tulane University in New Orleans, Louisiana, a member of Conference USA. Forté lettered for four years and played for 3 while pursuing a degree in finance. His junior year was cut short when he suffered an injury in the game against Marshall University. His standout season was his senior year, coming off a knee injury, Forté set several Tulane school records, including rushing for 2,127 yards and 23 touchdowns. He had five 200+ yard rushing games and two 300+ yard games during the 2007 season. Forté was the only non-BCS athlete to be a semifinalist for both the Maxwell and Doak Walker Awards and to make the Walter Camp Player of the Year List, and one of just 3 players nationally to be named to all three lists.

FULL ARTICLE AT WIKIPEDIA.ORG
This article is licensed under the GNU Free Documentation License.
It uses material from the Wikipedia article "Matt Forte."
Back to Article
/