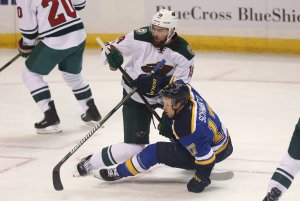 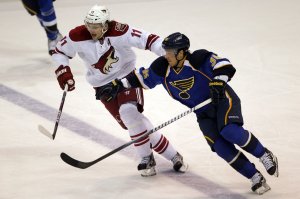 NHL // 3 years ago
Minnesota Wild shut out St. Louis Blues, avoid series sweep
It sounds simple, but the Wild came into Game 4 of their playoff series against the St. Louis Blues on Wednesday night with one goal: Get the series back home.

NHL // 4 years ago
NHL roundup: recap, scores, notes for every game played on March 21
BUFFALO, N.Y. -- Nick Bonino scored with 5:29 remaining to lead the Pittsburgh Penguins to a 3-1 win over the Buffalo Sabres on Tuesday night.

NHL // 4 years ago
Washington Capitals, Alex Ovechkin end dry spells in 4-2 win over Minnesota Wild
WASHINGTON -- A great goal scorer like Alex Ovechkin can only be held down for so long before what comes naturally returns to the surface.

Hanzal was the Phoenix Coyotes' first round draft pick, 17th overall, in the 2005 NHL Entry Draft. He played all of his junior career in the Czech Republic before playing for the Omaha Lancers of the United States Hockey League in the 2005–06 season. In 19 games, he had 19 points and in 5 playoff games, he had 1 goal.

Hanzal played the 2006–07 season with the Red Deer Rebels of the Western Hockey League, after being acquired from the Chilliwack Bruins before playing a game with the team. He led the Rebels in scoring with 85 points in 60 games.

FULL ARTICLE AT WIKIPEDIA.ORG
This article is licensed under the GNU Free Documentation License.
It uses material from the Wikipedia article "Martin Hanzal."
Back to Article
/