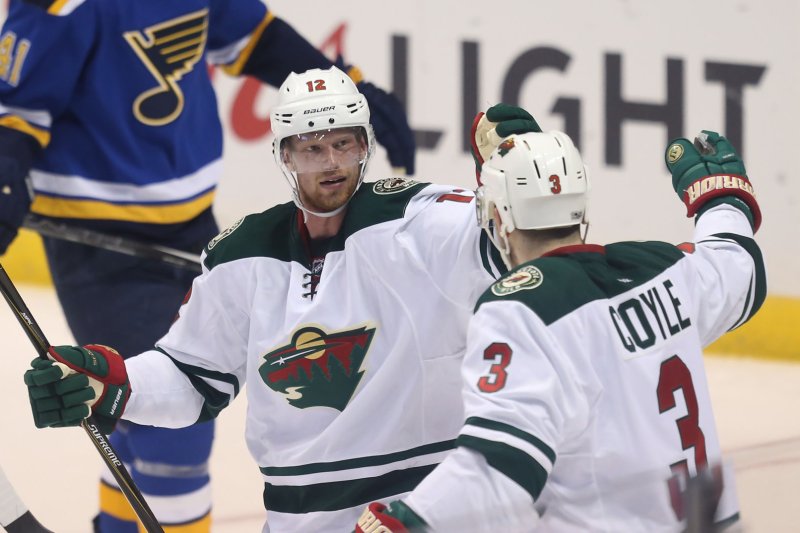 Minnesota Wild Eric Staal (12) skates in to celebrate Charlie Coyle's goal with him against the St. Louis Blues in the first period at the Scottrade Center in St. Louis on April 19, 2017. Photo by Bill Greenblatt/UPI | License Photo

St. Louis Patrik Berglund and Minnesota Wild Charlie Coyle try to get their sticks on the puck in the first period at the Scottrade Center in St. Louis on April 19, 2017. Photo by Bill Greenblatt/UPI | License Photo

ST. LOUIS -- It sounds simple, but Charlie Coyle and the Minnesota Wild came into Game 4 of their playoff series against the St. Louis Blues on Wednesday night with one goal: Get the series back home.

When a team is trailing three games to none, there really is no need to worry about anything else.

"That was our goal, and we got the job done," Coyle said. "Now we think about the next one, that's all."

Coyle's first-period goal, capitalizing on Blues goalie Jake Allen's first mistake of the series, started the Wild to a 2-0 win that continued their season for at least one more game.

Game 5 will be Saturday in Minnesota.

The Wild played as if their season was on the line from the start. They jumped on the Blues and didn't let up, finally getting their first lead in the series with 3:10 left in the period, on Coyle's second goal of the series.

Allen was behind his net and played the puck along the boards, where Coyle was waiting. Allen then got stuck behind the net and could not get back in time to be in a position to defend the shot.

The Blues thought icing could have been called on the play, but it wasn't.

"I'm not going to blame this game on bounces or breaks," Blues coach Mike Yeo said. "We weren't good enough. It's disappointing.

"Whether it was lack of desperation or nerves, we were on our heels. ... It didn't feel like our game. We need to do a better job of that. Because we weren't ready right from the start, we scrambled the whole game. We couldn't grab it back. We can't be ready to start the game like that and expect positive results."

Coyle and Wild coach Bruce Boudreau were just happy something finally went the Wild's way in the series.

"We'll certainly take a fumble on his part," Coyle said. "We'll take it to kind of get us going. We used that momentum the whole way."

Said Boudreau, "It was one bounce and we were happy to get it -- believe me. They did what they were asked to do on that play and we got a break. We hadn't had too many in the first three games, so we will take all we can get."

That turned out to be the only goal the Wild needed as Devon Dubnyk stopped 28 shots to earn his second career playoff shutout. He had played well in the thirst three games but was overshadowed by Allen's performance.

"Shutouts always feel good and I felt really good tonight," Dubnyk said. "We needed to win one game. That was the only thing that mattered. This is our Stanley Cup, and that's going to be the same thing on Saturday."

The Wild gave Dubnyk a little breathing room when Martin Hanzal got between defensemen Alex Pietrangelo and Jay Bouwmeester and beat Allen for his first goal of the series, with 3:19 left in the second period.

Dubnyk took over from there, making 12 saves to hold off a late push by the Blues in the third period.

"We were a step slow," the Blues' Alexander Steen said. "The decision-making was a little slower today. They were on point, like we expected them to be. Another tight one. We end up losing because of those details."

Both sides know the Blues still have the advantage in the series, even if they failed to complete a sweep in a playoff series for the first time since 2001.

"We had a chance to wrap it up at home and didn't make the most of it," Allen said. "It's a playoff series. We didn't expect to win four straight games coming in. Back to Minnesota, regroup tomorrow and go at it."

All Boudreau is going to ask of his team is the same effort they put into the game on Wednesday night, not worrying about the fact that just four teams in NHL history have ever come back to win a series after losing the first three games.

"It's only one game," Boudreau said. "They've still got a hell of an advantage: three games to one. I think we can play a lot better still than we played tonight. It's still going to be an uphill battle."

NOTES: C Erik Haula was not able to play for the Wild as he still has an upper-body injury, the result of a hard check into the boards in the second game of the series. He played in Game 3, but C Joel Eriksson Ek made his first appearance in the series for Game 4. ... The Blues used the same lineup for the third consecutive game, but a change could be coming. C Paul Stastny, out since March 21 with what is believed to be a broken foot, has resumed practicing and might be able to play in Game 5 on Saturday. ... C Alexander Steen did not practice for the last days for the Blues as he apparently deals with a lower-body injury, but he was still in the lineup Wednesday night. 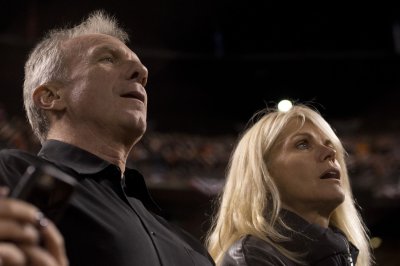