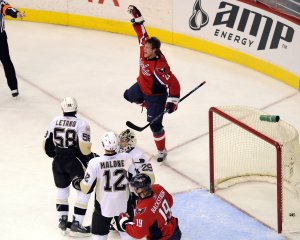 NHL // 1 year ago
San Jose Sharks' Joe Pavelski loses teeth after scoring goal with face
San Jose Sharks captain Joe Pavelski had the team's first goal against the Vegas Golden Knights in the first round, but the score came with some self-sacrifice.

NHL // 1 year ago
Golden Knights, Rangers seek bounce-back efforts
NEW YORK -- One thing is almost certain heading into Sunday's game between the New York Rangers and Vegas Golden Knights: Whomever loses probably can't do so in any weirder or agonizing fashion than they did Friday night.

NHL // 1 year ago
Paul Stastny could return as Vegas Golden Knights visit New York Islanders
On Wednesday night, the New York Islanders might begin to get an extended look at the goaltender they thought could serve as a No. 1 netminder this season.

Marc-André Fleury (born November 28, 1984) is a Canadian professional ice hockey goaltender playing for the Pittsburgh Penguins of the National Hockey League (NHL). Drafted out of the Quebec Major Junior Hockey League (QMJHL) first overall by the Penguins in the 2003 NHL Entry Draft, Fleury played major junior for four seasons with the Cape Breton Screaming Eagles, earning both the Mike Bossy Trophy as the league's top prospect and the Telus Cup as the top defensive player in 2003. He joined the Penguins in 2003–04 and won a Stanley Cup championship with the team five years later in 2009. Internationally, Fleury has represented Canada twice as a junior, winning back-to-back silver medals at the World Junior Championships in 2003 and 2004. He won a gold medal with Team Canada at the 2010 Winter Olympics in Vancouver.

Fleury is known by the nickname "Flower," derived from the English translation of his last name (fleuri is "in bloom," or "in Flower," in French). His goaltender masks always feature a fleur-de-lys on the backplate (in addition to the initials EFGT, honoring his four grandparents in memoriam), and have frequently featured some sort of flower on the front artwork, as well.

Fleury played major junior in the QMJHL for the Cape Breton Screaming Eagles, beginning in 2000–01. After a strong 2002–03 campaign that included a silver medal with Team Canada at the World Junior Championships and QMJHL Second Team All-Star honours, he was chosen first overall in the 2003 NHL Entry Draft by the Pittsburgh Penguins. He is only the third goalie to be chosen first overall in the NHL draft, after Michel Plasse and Rick DiPietro. Playing four seasons total with Cape Breton, Fleury's jersey number 29 was later retired by the club in his fourth NHL season on January 25, 2008.

FULL ARTICLE AT WIKIPEDIA.ORG
This article is licensed under the GNU Free Documentation License.
It uses material from the Wikipedia article "Marc-Andre Fleury."
Back to Article
/