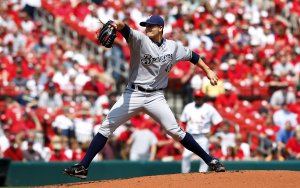 Sports News // 6 years ago
New York Mets top Cincinnati Reds, magic number at 3
CINCINNATI -- With a dismal homestand behind them, the New York Mets now have the National League East title in their sights.

Sports News // 7 years ago
Randal Grichuk's blast carries St. Louis Cardinals past Cincinnati Reds
CINCINNATI -- Randal Grichuk thought he had a three-run home run in the sixth inning Wednesday that would have tied the score.

Sports News // 7 years ago
Jay Bruce, Cincinnati Reds have blast, beat Chicago Cubs
CINCINNATI -- It was a classic Jay Bruce swing. And it came at an opportune time for the Cincinnati Reds.

Sports News // 7 years ago
Cleveland Indians ride bases-loaded walks to win over Cincinnati Reds
CINCINNATI -- The Cleveland Indians still are looking for big hits in key situations, but they will take what they got Sunday afternoon.

Sports News // 7 years ago
Suarez leads Cincinnati Reds past Washington Nationals
WASHINGTON -- One thing Cincinnati Reds manager Bryan Price knew about Eugenio Suarez when the shortstop was promoted from Triple-A Louisville in June was that his new player wouldn't be afraid to swing the bat.

Parra graduated from Casa Roble High School in 2000, and American River College in 2002. While playing in high school, he also played first base. He was named the National Junior College Player of the Year in 2002 by Baseball America.

On June 25, 2007, Parra pitched a perfect game against the Round Rock Express while playing for the Triple-A Nashville Sounds. This was only the third nine-inning perfect game in Pacific Coast League history; one of the other two was thrown by John Wasdin, also of the Sounds.

FULL ARTICLE AT WIKIPEDIA.ORG
This article is licensed under the GNU Free Documentation License.
It uses material from the Wikipedia article "Manny Parra."