2016 MLB preview: A team-by-team capsule, including key additions and losses

Members of the Kansas City Royals celebrate as they win the World Series defeating the New York Mets 7-2 in game 5 at Citi Field in New York City on November 2, 2015. The Royals are defending the title for the first time in 30 years. Photo by Pat Benic/UPI | License Photo

The Kansas City Royals made back-to-back World Series and are defending the title for the first time in 30 years.

The Chicago Cubs are suddenly a trendy pick to win their first championship in more than a century.

The Pittsburgh Pirates, a laughingstock for decades, are now a postseason regular.

All of the recent turnarounds must give hope to all 30 major league teams that anything is possible.

Here is a capsule look at each team, listed alphabetically within each division:

2016 skinny: Adding Greinke and Miller could be enough to make the Diamondbacks contenders. They have a good offense. The onus now is on the rest of the rotation, the bullpen and the middle infield.

2016 skinny: The Rockies added to their bullpen, but the youthful rotation is a work in progress. They do not figure to contend this season. They traded away the face of the franchise, SS Troy Tulowitzki, last season and shored up their prospect base but in the process are stuck with Jose Reyes.

2016 skinny: Greinke's departure as a free agent means the rest of the rotation must pick up the slack behind ace LHP Clayton Kershaw. Dave Roberts begins his managing career, replacing Don Mattingly. Just winning the division will not be enough. Roberts also must avoid the kind of early postseason exit that has plagued the Dodgers. Greinke's absence makes that more difficult.

2016 skinny: The Padres went all out for last season and flopped. Now they have pulled back and are rebuilding their minor league system. They figure to miss the postseason for the 10th year in a row. Their biggest offseason acquisition was Ramirez, 34, who is coming off a sub-par season.

2016 skinny: The Giants shored up their rotation and improved their defense up the middle. This is a well-rounded team as it tries to continue its trend of winning the World Series in alternate years -- 2010, 2012, and 2014 -- while missing the postseason in the next season. The Giants have a chance to keep it going this season.

2016 skinny: A rotation led by RHP Jake Arrieta, the 2015 NL Cy Young Award winner, backed by LHP Jon Lester and RHP John Lackey makes the Cubs strong contenders to go to the World Series. They were able to sign Heyward and Lackey away from division rival St. Louis. Winning the offseason is one thing, however, and winning the season is another.

2016 skinny: The Reds are a rebuilding team, and they have a long way to go after shedding some good players. They would do well to reduce their loss total from the 98 they had last season.

2016 skinny: The Brewers are rebuilding. They will not contend this season in a division that had both wild cards last season. The best they can look forward to is the eventual promotion of prospects such as SS Orlando Arcia.

2016 skinny: It could be a struggle for the Pirates to keep up with the Cardinals and Cubs in the division after losing Alvarez, Walker and Happ to free agency. They still have RHP Mark Melancon closing, and the bullpen will be the key.

2016 skinny: The Cardinals are well-equipped to fend off the challenge of the Cubs in the division, bolstered by the acquisition of Leake. They also will have C Yadier Molina for Opening Day as he returns from thumb surgery, and RHP Adam Wainwright will be available from the opening of the season after missing almost all of last year due to a torn Achilles tendon.

2016 skinny: The Braves are in a rebuilding program. and this year should be more of the same. Their main threat at the plate is 1B Freddie Freeman, and their rotation is filled with questions.

2016 skinny: Don Mattingly takes over as manager, and Barry Bonds takes over as hitting coach to help boost a struggling offense. Chen adds consistency to a rotation led by RHP Jose Fernandez, but Miami might need more to contend.

2016 skinny: Armed with baseball's best rotation and a good enough offense, the Mets are more than a one-year wonder. One pressing question is how to get the ball to their dominant closer, RHP Jeurys Familia, a weakness exposed during the 2015 postseason.

2016 skinny: The Phillies could rebound from their dismal 2015 to offer some hope to their fans. They have some talent on the way. Meanwhile, they will have to find a closer and a way to overcome some outfield injuries. 3B Maikel Franco was a home run machine at spring training.

2016 skinny: The Nationals failed to live up to expectations last year, and they underwent several changes in the offseason, including hiring Dusty Baker as manager. The rotation is led by RHP Max Scherzer and the offense is keyed by RF Bryce Harper, so Washington cannot be counted out.

2016 skinny: The rotation that features the 2015 AL Cy Young Award winner, LHP Dallas Keuchel, will open the season without promising RHP Lance McCullers, who has a sore shoulder. The lineup can hit, and Carlos Correa, the 2015 AL Rookie of the Year, will be the shortstop from the outset. The Astros are a potential World Series team.

2016 skinny: CF Mike Trout leads the offense and DH Albert Pujols should chip in as he returns from offseason surgery on his right foot. The acquisition of Simmons brings superb defense to a team that could make a run at the postseason.

2016 skinny: Oakland was out of the money last season after three straight postseason appearances, and the Athletics' chances are not bright this season. The bullpen, one of the worst in the majors last season, was bolstered, but there remain questions about the rotation beyond RHP Sonny Gray.

2016 skinny: The Mariners are unlikely to make their first postseason appearance since 2001, the longest drought in the majors, despite improvements to a rotation led by RHP Felix Hernandez and a rebuilt bullpen. They will improve on 2015, however.

2016 skinny: RHP Yu Darvish is expected to return from elbow surgery in May, and LHP Cole Hamels will be in the rotation from the beginning of the season, which can only be positive. The outfield could be thin. Free agent signee Desmond, a veteran shortstop, is being converted to left field with Josh Hamilton injured.

2016 skinny: The White Sox made some key moves in the offseason to try to end a run of three losing seasons. The story now is whether the controversy about LaRoche's retirement over an attempt to limit his son's presence will lead to a fractured clubhouse and undo the positive effects of the offseason work.

2016 skinny: Once again, Cleveland will open its season brimming with promise based on a strong rotation. Success will depend on how well the Indians hit. SS Francisco Lindor will be on the team from the start this season, and that should help if he continues to display the form he demonstrated in the second half last year.

2016 skinny: The Tigers fell to last after winning the AL Central for four years running as their vaunted rotation faltered. The starters should rebound and the offseason additions will help. The bullpen remains a question mark despite moves to strengthen it.

2016 skinny: A deep and talented bullpen again should be the key to the Royals' success, although the rotation also has talent. The re-signing of LF Alex Gordon, who was a free agent, leaves the offense mostly intact and gives Kansas City a chance to repeat as World Series champions.

2016 skinny: The Twins were considered a surprise last season mainly because the rotation exceeded expectations. With a better season from RHP Phil Hughes and a full season from RHP Ervin Santana, the starters should be good again. If Park makes the adjustment to the majors and 1B Joe Mauer has a better season, Minnesota will be a team to watch.

2016 skinny: The Orioles will hit home runs and score plenty of runs. They need their pitching to step up to contend. They added the serviceable Gallardo to their rotation, but the consistent Chen departed.

2016 skinny: The addition of free agent Price and the trade for closer Kimbrel strengthened the Red Sox at both ends of the pitching staff and thrust them into a contenders' role. Other pitchers will need to improve this season, however, and the defense should be better than it was last year.

2016 skinny: The Yankees' strength is the back of the bullpen, especially when Chapman returns from suspension, but the weakness appears to be the rotation. The offense depends on injury-prone older players, but the middle-infield defense is improved over last year.

2016 skinny: The Rays should continue with their trademark strong pitching and defense, although the throws of SS Brad Miller were an early spring training concern. The hitting might improve enough for the Rays to contend. The bullpen will be tested early with closer Brad Boxberger out until mid-May after having abdominal surgery during spring training.

2016 skinny: The offense is potent and, with Troy Tulowitzki at shortstop from the start of the season, the defense is solid. The bullpen should be good whether Storen or RHP Roberto Osuna closes for a team that should make a strong run at a division repeat. The question is the rotation, beginning with the Opening Day starter, RHP Marcus Stroman, a brilliant talent who has not pitched a full major league season. 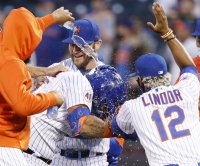