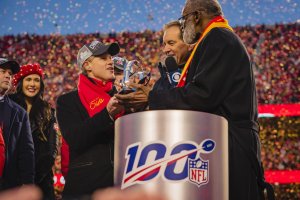 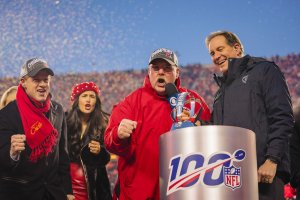 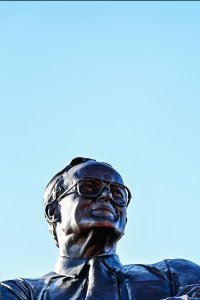 NFL // 10 months ago
Mahomes, Chiefs beat Bills for second straight trip to Super Bowl
Patrick Mahomes and the defending champion Kansas City Chiefs rolled to a 38-24 win over the Buffalo Bills in Sunday's AFC Championship Game at Arrowhead Stadium to reach the Super Bowl for the second consecutive year.

NFL // 4 years ago
New England Patriots have been here before, don't take it for granted
FOXBOROUGH, Mass. -- Coach Bill Belichick and handful of New England players held press conferences on Wednesday in front of an AFC Championship Game backdrop at Gillette Stadium.

Top News // 5 years ago
The Almanac
On Aug. 2, 1923, President Warren G. Harding died of a stroke in a San Francisco hotel at the age of 58. He was succeeded by Vice President Calvin Coolidge.

For all of his countless accomplishments in the world of sports, my father's legacy will always be most closely linked to the founding of the American Football League and its subsequent merger with the NFL

The business community, the political leaders at both the city and county levels, the Royals, and most importantly many of the citizens of Jackson County all showed some support for the rolling roof

I think it is most appropriate that the two teams have committed to new 25-year leases, and that the public will at the same time have the parallel, but separate opportunity to vote to complete the original project design with the rolling roof

Lamar Hunt (August 2, 1932 – December 13, 2006) was an American sportsman and promoter of American football, soccer, basketball, and ice hockey in the United States and an inductee into three sports' halls of fame. He was one of the founders of the American Football League (AFL) and Major League Soccer (MLS), as well as MLS predecessor the North American Soccer League (NASL). He was also the founder and owner of the National Football League's Kansas City Chiefs, the Kansas City Wizards and at his death owned two MLS teams, Columbus Crew and FC Dallas. The oldest annual team tournament in the U.S. in any sport, soccer's U.S. Open Cup (founded 1914) now bears his name in honor of his pioneering role in that sport stateside. In Kansas City, Hunt also helped establish the Worlds of Fun and Oceans of Fun theme parks. He was inducted into the Pro Football Hall of Fame in 1972; into the National Soccer Hall of Fame in 1982; and into the International Tennis Hall of Fame in 1993. The National Soccer Hall of Fame bestowed upon Hunt their Medal of Honor in 1999, an award given to only 3 recipients in history thus far. He was married for 42 years to his second wife Norma, and had four children, Sharron, Lamar Jr., Daniel, and Clark Hunt.

Hunt was born in El Dorado, Arkansas, the son of oil tycoon H. L. Hunt and younger brother of tycoons Nelson Bunker Hunt and William Herbert Hunt. Lamar was raised in Dallas, Texas. He attended Culver Military Academy and graduated from The Hill School in Pennsylvania in 1950 and Southern Methodist University in Dallas in 1956, with a B.S. degree in geology. Hunt was a college football player who rode the bench but was still an avid sports enthusiast during his time in college and throughout his entire childhood. While attending SMU, Hunt joined the Kappa Sigma Fraternity and in 1972 was named "man of the year."

On the strength of his great inherited oil wealth, Hunt applied for a National Football League expansion franchise but was turned down. In 1959, professional football was a distant second to Major League Baseball in popularity, and the thinking among NFL executives was that the league must be careful not to "oversaturate" the market by expanding too quickly. Hunt also attempted to purchase the NFL's Chicago Cardinals franchise in 1959 with the intent to move them to Dallas, but was again turned down.

FULL ARTICLE AT WIKIPEDIA.ORG
This article is licensed under the GNU Free Documentation License.
It uses material from the Wikipedia article "Lamar Hunt."