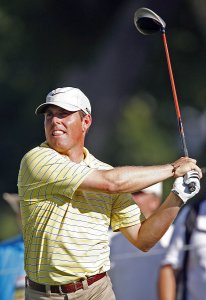 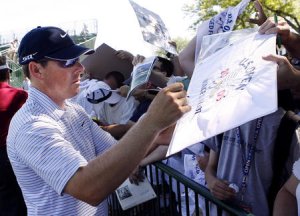 Golf // 3 years ago
South Korean Si Woo Kim becomes youngest winner of Players Championship
For most of Sunday, Si Woo Kim of South Korea looked as if he were taking a walk in the park rather than trying to hold the lead in one of the PGA Tour's most important events.

Golf // 4 years ago
British Open 2016: Dustin Johnson ready to contend with Spieth, McIlroy, and Day at Royal Troon
The Americans have virtually owned Royal Troon, which will host the 145th Open Championship this week, and the buzz is that the next to win there might be Dustin Johnson -- who finally seems to have taken full ownership of his immense talent.

Golf // 4 years ago
PGA Tour: Top 10 players to watch at the Valero Texas Open
1. Branden Grace, South Africa -- When Grace won for the first time on the European Tour in the 2012 Joburg Open, he followed by winning the Volvo Golf Champions the next week. He will try to do the same this week in the Valero Texas Open after claiming his first PGA Tour victory on Sunday in the RBC Heritage. Grace, now No. 12 in the World Golf Rankings, has 11 victories in his career and on three occasions has won twice in a matter of weeks. He has four other top-10 finishes and eight in the top 25 this season, including a victory in the Commercial Bank Qatar Masters. He is making his third start at TPC San Antonio, having tied for 79th in 2014 and tied for 30th last year.

Sports News // 4 years ago
Bubba Watson leads by 1 at Riviera
One moment Jason Kokrak was in front of the Northern Trust Open. Then it was Chez Reavie. When the third round came to a close, it was Bubba Watson.

When I won here in 2005, I led every day and almost let it slip away at the end

That putt on 16 in the playoff, I thought I hit a good putt it just moved a little bit more than I thought

I ought to write a book called 'Winning Ugly', because I've done it. I did it today

It is nice to have the lead, certainly a lead this big

Leonard was born and raised in Dallas, Texas. He attended Lake Highlands High School and graduated in 1990. He attended the University of Texas at Austin and was the individual NCAA champion in 1994. He won the Haskins Award in 1994 as the most outstanding collegiate golfer.

Leonard's first twelve wins on the PGA Tour included one of golf's four majors — the 1997 British Open; and the 1998 Players Championship. He ranked in the top-10 of the Official World Golf Rankings for several weeks in 1998 and 1999. He also came close to winning two more major championships; he lost playoffs at the 1999 British Open and the 2004 PGA Championship, in both instances falling into the playoff with a bogey on the 72nd hole.

FULL ARTICLE AT WIKIPEDIA.ORG
This article is licensed under the GNU Free Documentation License.
It uses material from the Wikipedia article "Justin Leonard."
Back to Article
/