Adam Hadwin of Canada hits the golf ball. Hadwin is one of the frontrunners in the Valero Texas Open. (Twitter/Sportsnet)

Following his first PGA Tour victory last month in the Valspar Championship, Hadwin tied for 36th in his first Masters and rallied to tie for 22nd in the RBC Heritage in what has been a breakthrough season. He has recorded four top-10 finishes, including second to Hudson Swafford in the CareerBuilder Challenge after shooting 59 in the third round. The 29-year-old Canadian also finished sixth in the Arnold Palmer Invitational and tied for 10th in the OHL Classic at Mayakoba, and has recorded seven results in the top 25 to rank fifth in the FedExCup standings. Hadwin, who has 12 pro victories, including two on the Web.com Tour in 2014 when he was leading-money-winner and two on the PGA Tour Canada, is making only his second start in the Valero Texas Open. Two years ago he opened with an ugly 11-over-par 83 before bouncing back with a 69, but still missed the cut by two strokes.

Jimmy Walker hits his 3rd shot to the 17th green in the final round at the PGA Championship. File photo by John Angelillo/UPI
After batting mononucleosis, which led to some inconsistent play early this season, Walker seemed to be better when he tied for 18th in the Masters in his last start, and playing at home in San Antonio might be all he needs to come all the way back. He is making his 11th start in the Valero Texas Open and he won on home turf two years ago by holding off Jordan Spieth, another Texan, down the stretch. Spieth made four birdies in the closing stretch while playing alongside Walker, who fended him off with two of his own to win by four strokes as they both shot 2-under-par 70. Walker, who has six PGA Tour victories including the PGA Championship last year, shot 75-77 -- 152 to miss the cut by seven strokes in his title defense, but he also tied for third in 2010, closing with a 69 to finish two shots behind winner Adam Scott.
Advertisement

Matt Kuchar hits out of a bunker on the 2nd hole in the second round at the Masters. File photo by Kevin Dietsch/UPI
"Kooch" followed up his tie for fourth in the Masters by rallying with a 64 in the final round of the RBC Heritage, which he won in 2014, to wind up in a tie for 11th. He took time off at the beginning of this season after playing through December and seems to finally be rounding into form, although he hasn't been too far off his game with seven finishes in the top 25 in 12 starts this season. Kuchar is making his 13th appearance in the Valero Texas open and his best finish in the tournament was a tie for second in 2001, when his 64 in round two highlighted four scores in the 60s, but he wound up two shots behind three-time Texas Open winner Justin Leonard. Kooch also tied for fourth two years ago, moving into a tie for second with a 65 in round three before he finished with a 75 to wind up two strokes behind winner Steven Bowditch.
Advertisement

Charley Hoffman hits from the 2nd hole fairway in the third round at the 2017 Masters. File photo by John Angelillo/UPI
The defending champion in the Valero Texas Open arrives at TPC San Antonio after missing the cut in the RBC Heritage last week, but he has finished in the top 25 in three of his last five tournaments, including a tie for second last month behind Marc Leishman of Australia in the Arnold Palmer Invitational. Hoffman opened with a 6-under-par 66 on the Oaks Course last year and was in the hunt all the way before sinking an eight-foot birdie putt on the final hole to cap a 69 and beat Patrick Reed by one stroke for his fourth victory on the PGA Tour. He has a remarkable record in the Texas Open, having finished worse than a tie for 13th only once in 12 previous starts, including a tie for second, one shot behind Brendan Steele in 2011, a tie for third in 2013 and a tie for eighth in 2006. Hoffman also tied for 11th three times.
Advertisement

Brendan Steele blasts out of a bunker onto the 8th green during the final round of the 93rd PGA Championship. File photo by Brian Kersey/UPI
Steele claimed his first PGA Tour victory as a rookie six years ago in his first appearance in the Valero Texas Open and has continued to play well at TPC San Antonio in the five years since that breakthrough. He tied for fourth as the defending champion on the Oaks Course, tied for eighth two years ago and last year held the 36-hole lead at 64-70 before playing the weekend in 70-72 and slid to a tie for 13th. Steele sank a seven-foot birdie putt on the 18th hole in 2011 to beat Kevin Chappell and Charley Hoffman by one stroke, but he didn't back that up with his second win on the circuit until he won the Safeway Open last October to start the 2016-17 season. He is well rested after taking two weeks off since tying for 27th in the Masters and hopes to improve on his 10th-place ranking in the FedExCup standings.
Advertisement 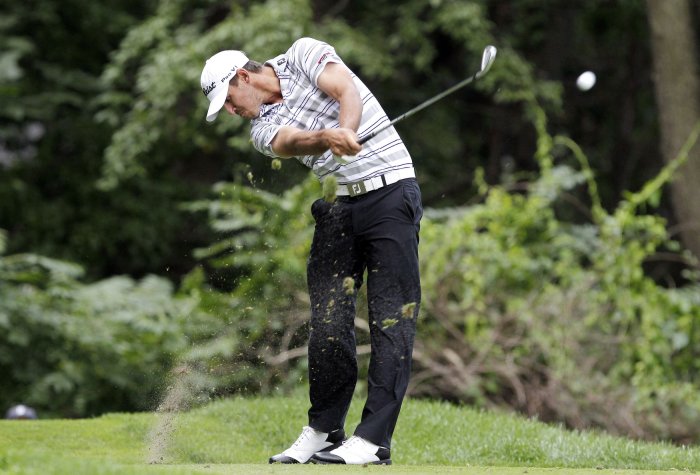 Brooks Koepka hits a tee shot on the 3rd hole in the final round of the PGA Championship. File photo by John Angelillo/UPI
After playing some of his best golf of the season in his last two starts against strong fields, tying for ninth in the WGC-Dell Technologies Match Play and tying for 11th in the Masters, Koepka will try to keep it going after taking two weeks off. Those were his best results since he finished second in the Shriners Hospitals for Children Open in October, when he opened with a 62 and stayed in the chase all the way before closing with a 67 to wind up two strokes behind Rod Pampling of Australia. Stardom has been predicted for Koepka since he came out of Florida State in 2012, but he has won only the 2015 Waste Management Phoenix Open on the PGA Tour, although he does have six other victories around the world. In two appearances in the Valero Texas Open, he tied for 36th in 2014 and shot 73-72 -- 145 to miss the cut by one stroke last year.
Advertisement

Luke Donald tees off on the 18th hole during the third round of the 115th U.S. Open Championship. File photo by Terry Schmitt/UPI
The Englishman obviously was disappointed to finish second in the RBC Heritage for the fifth time last week (he also has been third twice), this time finishing one stroke behind Wesley Bryan. The former world No. 1 will continue to climb his way back toward the top this week when he plays in the Valero Texas Open for the fifth time. Donald had not teed it up in the tournament since tying for 34th in 2003, but in his first appearance on the AT&T Oaks Course at TPC San Antonio last year, he was two strokes out of the lead in tie for third before closing with a 2-over 74 and skidded to a tie for 13th. When Donald climbed to the top spot in the Official World Golf Rankings in 2011, he tried to get more distance off the tee, but after winning three times in 2012 and another title in 2013, he has gone winless. However, his peerless short game seems to be bringing him back.
Advertisement

Martin Laird walks off of the 10th green at the 113th U.S. Open. File photo by John Angelillo/UPI
The Scot has recorded four finishes in the top 10 on the PGA Tour during the 2016-17 season, the best a tie for seventh in the Waste Management Phoenix Open, and he is back this week at one of his favorite courses, TPC San Antonio. He claimed his third PGA Tour title on the Oaks Course in 2013, coming from five shots down in the final round with an 8-under-par 63 that gave him a two-stroke victory over Rory McIlroy of Northern Ireland, who was challenging for No. 1 in the Official World Golf Rankings at the time. Laird is playing in the Valero Texas Open for the fifth time, and he also tied for ninth in 2011. The 34-year-old has won three times on the PGA Tour, also claiming the 2011 Arnold Palmer Invitational and the 2009 Justin Timberlake Shriners Hospitals for Children Open in a playoff, but lost the same event to Jonathan Byrd in a playoff as defending champion.
Advertisement 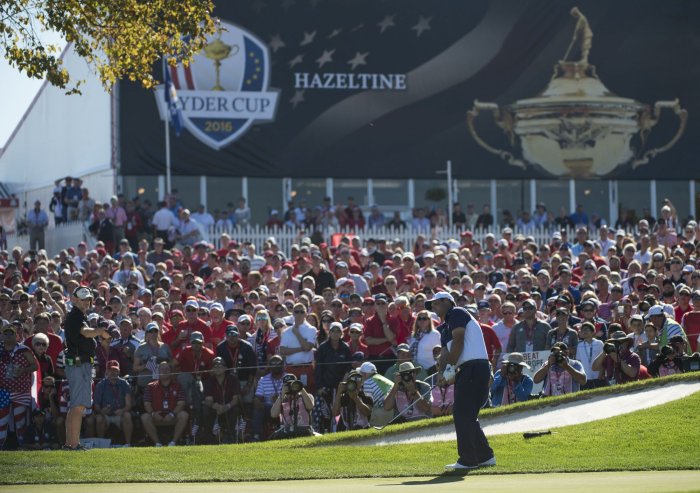 USA team member Patrick Reed chips onto the 17th green during the final round of the 2016 Ryder Cup. File photo by Kevin Dietsch/UPI
Perhaps being back in his native Texas will wake up Reed, whose only finish in the top 10 this season on the PGA Tour was a tie for sixth in the SBS Championship at Kapalua in January. He has won five times on the circuit in the last four years, including the Barclays to kick off the PGA Tour playoffs last year, but this year has been a struggle. He has missed the cut in his last two starts, the Shell Houston Open, when he shot 77 in the first round, and the Masters, posting another 77 in the second round. Reed is making his third start in the Valero Texas Open, and last year he opened with a 7-under-par 65 and closed with a 69, only to lose by one stroke when Charley Hoffman sank an eight-foot birdie putt on the final hole. He was born in San Antonio and lives in Spring, Texas, but still is searching for his first PGA Tour victory in the Lone Star State.
Advertisement

Kevin Chappell tees off on the 7th hole in the first round at the 2017 Masters. File photo by John Angelillo/UPI
A former UCLA All-American who won the Jack Nicklaus Award as college player of the year in 2008, Chappell is coming off a tie for seventh in the Masters in his last start and might finally be ready to live up to the promise he showed coming out of college. He closed with a 4-under-par 68 at Augusta National and showed last year that he isn't afraid of the big stage when he played his way into a playoff with Rory McIlroy and Ryan Moore in the Tour Championship, with McIlroy winning on the fourth extra hole. Chappell will tee it up in the Valero Texas Open for the eighth time and last year he closed with a 4-under-par 68 to wind up in a tie for fourth, three strokes behind winner Charley Hoffman. However, his best result at TPC San Antonio came in 2011, when he was tied for the lead after a first-round 68 and finished in a tie for second, one shot behind Brendan Steele.
Advertisement