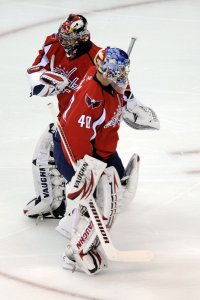 He's been taking it on the advice of a dermatologist

I faced a lot of shots and was a little surprised there were no penalties, but both teams played with discipline

Théodore played major junior in the Quebec Major Junior Hockey League (QMJHL), where he won a President's Cup as QMJHL champions and competed in the Memorial Cup with the Hull Olympiques in 1995. He won both the Ford Cup as the top defensive player and Guy Lafleur Trophy as playoff MVP in 1995 and is a two-time QMJHL Second Team All-Star.

Drafted 44th overall by the Montreal Canadiens in 1994, Théodore played eight seasons in Montreal, where he won the Vezina and Hart trophies, both in 2002. In 2006, he was traded to the Colorado Avalanche, where he played two full seasons.

FULL ARTICLE AT WIKIPEDIA.ORG
This article is licensed under the GNU Free Documentation License.
It uses material from the Wikipedia article "Jose Theodore."
Back to Article
/