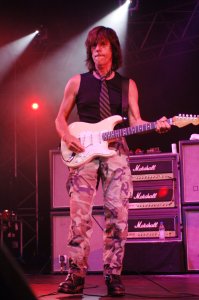 Top News // 5 years ago
The Almanac
UPI Almanac for Wednesday, June 24, 2015
Blog // 6 years ago
LeAnn Rimes debuts iPhone filmed 'Gasoline and Matches' video
LeAnn Rimes teamed up with Rob Thomas and Jeff Beck in her latest single "Gasoline and Matches" and the video for the track, which was released Friday, was filmed entirely with an iPhone.
Odd News // 7 years ago
The almanac
UPI Almanac for Monday, June 24, 2013.
Music // 7 years ago
'Fast Fingers' Dawkins dead at 76
Mississippi-born blues guitar great Jimmy "Fast Fingers" Dawkins, who took Chicago's West Side sound around the world, has died, an associate said. He was 76.
Entertainment News // 7 years ago
Kennedy Center comics target Obama
President Obama and some of the seven award recipients were targets of comedians' jokes Sunday night at the Kennedy Center Honors program in Washington.
Music // 7 years ago
Stones kick off 50th anniversary tour
The Rolling Stones showed their fans they still have something left in the tank when they kicked off their 50th anniversary tour in London Sunday night.
Music // 8 years ago
White House celebrates the blues
An all-star lineup headed by B.B. King, Mick Jagger, Buddy Guy and Jeff Beck helped U.S. President Barack Obama celebrate the blues at the White House Tuesday.
Music // 1 decade ago
Kings of Leon set for Bonnaroo fest
Kings of Leon, Dave Matthews Band and Kris Kristofferson are confirmed to perform at Tennessee's Bonnaroo music and arts festival, organizers said.
Entertainment News // 1 decade ago
Metallica, Run-DMC get Rock Hall nods
Metallica, Run-DMC and the Stooges are among the acts nominated for induction into the Rock and Roll Hall of Fame next year in Cleveland, it was announced.

Geoffrey Arnold "Jeff" Beck (born 24 June 1944) is an English rock guitarist. One of three noted guitarists, with Eric Clapton and Jimmy Page, to have played with The Yardbirds, Beck also formed The Jeff Beck Group and Beck, Bogert & Appice. He was ranked 14th in Rolling Stone's list of the "100 Greatest Guitarists of All Time" and the magazine has described him as "one of the most influential lead guitarists in rock". He was also ranked second greatest rock guitarist of all time in Digital Dream Door, a site that ranks movies and music. MSNBC has called him a "guitarist's guitarist".

Much of Beck's recorded output has been instrumental, with a focus on innovative sound and his releases have spanned genres ranging from blues-rock, heavy metal, jazz fusion and most recently, an additional blend of guitar-rock and electronica. Beck has earned wide critical praise; furthermore, he has received the Grammy Award for Best Rock Instrumental Performance six times. Although he has had two hit albums (in 1975 and 1976) as a solo act, Beck has not established or maintained a broad following or the sustained commercial success of many of his collaborators and bandmates. Beck appears on albums by Mick Jagger, Kate Bush, Roger Waters, Stevie Wonder, Les Paul, Zucchero, Cyndi Lauper, Brian May and ZZ Top. He also made a cameo appearance in the movie Twins (1988).

FULL ARTICLE AT WIKIPEDIA.ORG
This article is licensed under the GNU Free Documentation License.
It uses material from the Wikipedia article "Jeff Beck."
Back to Article
/