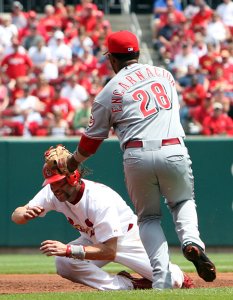 Michael Jason "Rusty" LaRue (born March 19, 1974 in Houston, Texas) is a Major League Baseball catcher for St. Louis Cardinals. LaRue agreed to a two-year, $9.1 million contract with the Cincinnati Reds on December 20, 2005. On November 20, 2006, LaRue was traded to the Kansas City Royals for a player to be named later. Since a player could not be agreed upon, the Royals opted to send the Reds cash considerations in the amount of one dollar.

After being selected in the 5th round of the 1995 MLB draft out of Dallas Baptist University, LaRue debuted with Cincinnati on June 15, 1999 and became Cincinnati's starting catcher in 2001. 2005 was his best overall season with 14 HR, 60 RBI and .260 batting average.

On Mother's Day, May 14, 2006, LaRue was one of more than 50 hitters who brandished a pink bat to benefit the Breast Cancer Foundation. He was also one of a handful of players to hit a home run with a pink bat.

FULL ARTICLE AT WIKIPEDIA.ORG
This article is licensed under the GNU Free Documentation License.
It uses material from the Wikipedia article "Jason LaRue."
Back to Article
/